Personalisation of Politics in the Uk: Mediated Leadership from Attlee to Cameron [Pehme köide] 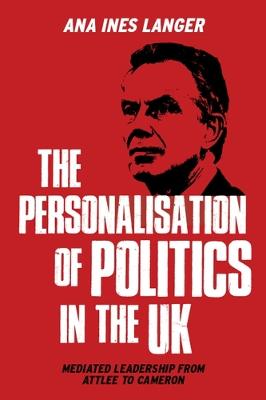 Suurem pilt
Teised raamatud teemal:
Püsilink: https://www.kriso.ee/db/9781526122841.html
Märksõnad:
What does it mean to say that modern politics is personalised? To what extent is it more personalised than in the past, what is distinctive about contemporary forms of personalisation and are these changes enduring? This book addresses these questions. It re-thinks the concept of personalisation and develops an analytical framework for its study, in the process challenging current theorisation and bridging the political science and media studies approaches to the subject. Moreover, it presents new, rich and rigorous empirical data about how personalisation has developed over time in the UK, from 1945 to 2009.
Its conceptual depth and empirical range makes the book a must-read for anyone researching the phenomenon of personalisation internationally, and a benchmark for future studies. It is also highly accessible to undergraduate and graduate students in political communication, British politics and media studies.
Näita rohkemNäita vähem

With its clear focus and structure, as well as its logically developing arguments, Langer's book will appeal not only to those interested in the topics of personalisation and political communication, but also more broadly to those concerned with the practices of (modern) democracy. Langer's book sheds new light onto the conceptual muddle related to the personalisation of politics, provides much needed historical and empirical evidence on how the phenomenon developed in the UK and identifies its main characteristics. Through informed discussion of the subject she makes a strong case for the point that personalised discourse can engage citizens and politically motivate them. Langer's definition of the politicisation of public persona is a very useful concept, because it helps pinpoint the exact manifestation of the personal in public discourse, and the empirical evidence provided in the book is a great starting point for anybody interested in this phenomenon. "In addition to imposing conceptual clarity on the subject, Langer's book makes a convincing case, for anyone who doubted it, of a gradual blurring in British public discourse of prime ministers' leadership qualities and their ability to do the job, on the one hand, and their personal lives and 'human qualities', on the other." Nicholas Allen (Royal Holloway, University of London), Political Studies Review, May 2014 -- .

Näita rohkemNäita vähem
Acknowledgments Introduction
1. The presidentialisation of power
2. Personality politics and the politicisation of private persona
3. Personalisation(s) of politics in the press: British prime ministers 1945 2009
4. The historical evolution of the politicisation of private persona: Baldwin to Major
5. Tony Blair - The special one
6. Gordon Brown and David Cameron Conclusion References -- .
Ana Langer is Senior Lecturer in Politics at the University of Glasgow. -- .
Näita rohkemNäita vähem