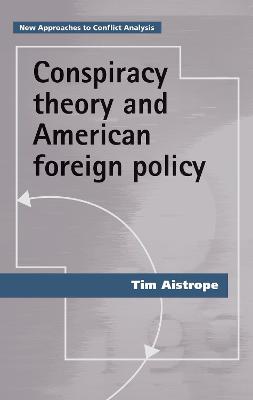 Suurem pilt
Teised raamatud teemal:
Püsilink: https://www.kriso.ee/db/9781526139382.html
Märksõnad:
Conspiracy theory and American foreign policy examines the relationship between secrecy, power and interpretation around international political controversy, where foreign policy orthodoxy comes up hard against alternative interpretations. It does so in the context of American foreign policy during the War on Terror, a conflict that was quintessentially covert and conspiratorial. This book adds a new dimension to the debate by examining the 'Arab-Muslim paranoia narrative': the view that Arab-Muslim resentment towards America is motivated to some degree by a paranoid perception of American power in the Middle East. This narrative subsequently made its way into numerous US Government policy documents and initiatives advancing a War of Ideas strategy aimed at winning the 'hearts and minds' of Arab-Muslims.

This study provides a novel reading of the processes through which legitimacy and illegitimacy is produced in foreign policy discourses. It will appeal to a wide cross-disciplinary audience interested in the burgeoning issues of conspiracy, paranoia, and popular knowledge, including their relationship to and consequences for contemporary politics.
Näita rohkemNäita vähem

'[ This] is an excellent scholarly work and deserves to be read alongside books such as Richard Jackson's Writing the War on Terrorism and Stuart Croft's Culture, Crisis and America's War on Terror.' Associate Professor Jack Holland, University of Leeds 'I found Aistrope's analysis compelling. Relevant and timely, Aistrope's book provides critical insights into a process that has profound global implications, the making and projection of US foreign policy and the different ways in which it is perceived at home and abroad.' Associate Professor Diane Kirby, University of Ulster 'This insightful commentary brings important critical-theoretical analysis into conversation with the study of US foreign policy, an intersection which is all too rare in contemporary IR.' Dr Aggie Hirst, City University of London 'Aistrope draws upon the burgeoning pool of critical IR scholarship concerned with US foreign policy, positioning this book alongside the works of James Der Derian, Michael Shapiro, Jim George and Richard Jackson. This intellectual lineage is impressive. This book-thoroughly researched, intellectually sophisticated and powerfully argued-signals the emergence of a talented new scholar.' Dr Damien Rogers, Massey University -- .