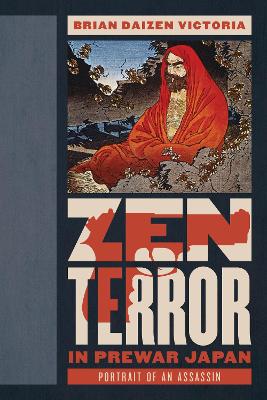 Suurem pilt
Teised raamatud teemal:
Püsilink: https://www.kriso.ee/db/9781538131664.html
Märksõnad:
Can Buddhism, widely regarded as a religion of peace, also contribute to acts of terrorism? Through an insider's view of right-wing ultranationalism in prewar Japan, this powerful book follows a band of Zen Buddhist-trained adherents who ardently believed so. Brian Victoria, himself a Zen priest, tells the story of a group of terrorists who were responsible for the assassination of three leading political and economic figures in 1932 and 1933. Victoria provides a detailed introduction to the religious as well as political significance of the group's terrorist beliefs and acts, focusing especially on the life and times of the band's leader, Inoue Nissho. A deeply troubled youth, Inoue became a spy in Manchuria for the Japanese Army in 1909, where he encountered Zen for the first time. When he returned to Japan in 1921, he determined to resolve his deep spiritual discontent through meditation practice, which culminated in an enlightenment experience that resolved his long-term doubts. After engaging in "post-enlightenment training" under the guidance of Rinzai Zen master Yamamoto Gempo, Inoue began a program of training the "patriotic youth" who formed the nucleus of his terrorist band. After the assassinations, Inoue and his band were sentenced to life imprisonment, only to be released just a few years later in 1940. Almost unbelievably, Inoue then became the live-in confidant of Prime Minister Konoe Fumimaro, a position he held through the end of WWII. In the postwar era, Inoue reinvented himself again as the founder and head of yet another band of ultranationalists known as the "National Protection Corps." His eventful life came to an end in 1967. Victoria concludes with an assessment of the profound impact of the assassinations, which culminated in Japan's transformation into a totalitarian state and set the stage for Pearl Harbor. The author also examines the connection of Buddhism to terrorism more broadly, considering the implications for today's Islamic-related terrorism.
Näita rohkemNäita vähem

This third volume completes a masterly trilogy exposing how the violent undercurrents in Zen surfaced in modern times in the form of a militaristic right-wing ideology. Rather than focusing on Zen warmongering, as in the first two volumes, the subject of the present book is terrorism. Buddhism and terrorism might seem unlikely partners, but Victoria's carefully documented research traces how a partnership of febrile nationalism and Zen ideology led to Inoue Nissho becoming the leader of a terrorist group in pre-WWII Japan. The book makes sobering reading for those who still see Buddhism as exclusively a religion of peace, and will be an invaluable resource for anyone interested in the chilling relationship between religion and terror. -- Damien Keown, Emeritus Professor of Buddhist Ethics, University of London Goldsmiths