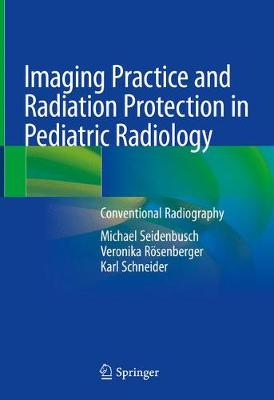 This book offers the reader sound advice on how to perform optimal conventional pediatric radiographs and how to obtain quick and easy organ dose estimates in order to improve the optimization process in pediatric imaging. Clear guidelines are provided for minimization of the radiation exposure of children through optimization of the radiation exposure conditions, and conversion coefficients are presented for calculation of the organ doses achieved in organs and tissues during conventional pediatric radiography, taking into consideration both optimal and suboptimal radiation field settings. Previously published conversion coefficients have failed to represent the variation in radiation field settings in daily clinical routine, which has made it difficult for the pediatric radiologist to estimate the impact of the field settings on absorbed doses in organs and tissues. The aim of this book, co-written by a pediatric radiologist, a physician and physicist, and a medical radiation technologist, is to address this issue by providing, for the first time, a thorough overview of clinical radiation field settings and their implications for radiation protection. An accompanying volume is devoted to fluoroscopy.

Näita rohkemNäita vähem
Introduction: Outline of Paediatric radiology.- Radiation exposure and radiation risk in diagnostic radiology.- Image quality and radiographic technique .- Fundamentals of Radiation Dosimetry: Radiation dose and dosimetry in paediatric radiology.- Image quality in paediatric radiology.- Technical principles of conventional paediatric radiography.- Standard Operating Procedures (SOP) and Normalized Organ Doses for Conventional Radiographs : Introduction.- Skull.- Chest.- Babygram.- Abdomen.- Pelvis.- Spine.- Hip joint.- Upper Extremities.- Lower Extremities.- Shoulder and clavicle.
Michael C. Seidenbusch, physicist and physician, was a research fellow as medical physicist in the paediatric radiology department of Dr. von Hauner's Children's Hospital of the University of Munich from 2003 to 2015. Together with his mentor Karl Schneider, he performed several large dosimetric studies about the radiation exposure of children during x-ray examinations at Dr. von Hauner Childrens Hospital. This research work covered a forty years period of time with more than 400.000 dosimetric data of paediatric patients. In collaboration with the Institute of Medical Biostatistics, Epidemiology and Informatics (IMBEI) of the University of Mainz, Germany, he performed two large epidemiological studies about the radiation risk of children during conventional and computed tomographic examinations. In behalf of the German Federal Office for Radiation Protection he conducted a cross-sectional survey about modern CT practices in Germany. He acquired his doctoral dissertation and the thesis on the cumulative radiation exposure of children of all age groups during conventional and computed tomographic x-ray examinations. He received several science awards for his scientific and teaching activity. He is member of the German Physics Association, the German Society of Medical Physics and the German Society of Paediatric Radiology. Veronika Roesenberger, the chief technologist of the paediatric radiology department of Dr. von Hauners' Children's Hospital of the University of Munich from 1979 to 2015, was one of the leading paediatric radiographers in Germany. Very early she qualified as a teaching technologist and has become an expert of paediatric imaging, especially radiography, fluoroscopy, angiography and scintigraphy. She took an active part in the organization of the annual meeting of the European Society of Paediatric Radiology, held 1990 in Munich. Between 1994 and 2000 she participated in several research projects on paediatric imaging of the European Commission. The main challenge from 2000 up to 2015 for her was the implementation of digital radiography and the elaboration of SOP (specific operation procedures) for all kinds of paediatric imaging. She made all the adjustments of the RIS-PACS system which was the prerequisite of a perfect functioning radiology department. For more than 30 years she was an active member of the teaching school for radiographers of the University of Munich and presented many papers in training courses of German Roentgen Society and the German Society of Paediatric Radiology. Karl O. Schneider, professor of paediatrics and paediatric radiology, was the head of the paediatric radiology department of Dr. von Hauner's Children's Hospital of the University of Munich from 1990 to 2013. He conducted four large Europe-wide dosimetric and image quality surveys on frequent paediatric x-ray examinations which were granted by research programmes of the European Commission. He was the head of the European network of paediatric radiologists and co-author of the European Guidelines on Quality criteria for diagnostic radiographic images in paediatrics published by the European Commission in 1996. Up to now, he published more than 200 original papers and many book chapters mainly on the topic of paediatric dosimetry and radiation protection. For many years he was an active member of the German Radiation Protection Board and elaborated the paediatric part of the national guidelines of the German Medical Association. For more than thirty years, he was member of the European Society of Paediatric Radiology, the German Roentgen Society and honorary member of the German Society of Paediatric Radiology.
Näita rohkemNäita vähem