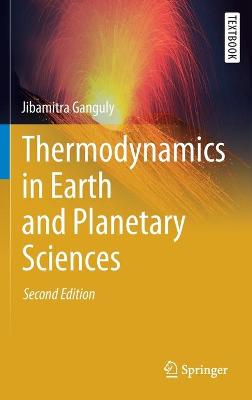 Based on a university course, this book provides an exposition of a large spectrum of geological, geochemical and geophysical problems that are amenable to thermodynamic analysis. Many on the book’s features are frequently missing in textbooks.

Based on a university course, this book provides an exposition of a large spectrum of geological, geochemical and geophysical problems that are amenable to thermodynamic analysis. It also includes selected problems in planetary sciences, relationships between thermodynamics and microscopic properties, particle size effects, methods of approximation of thermodynamic properties of minerals, and some kinetic ramifications of entropy production. The textbook will enable graduate students and researchers alike to develop an appreciation of the fundamental principles of thermodynamics, and their wide ranging applications to natural processes and systems.

Näita rohkemNäita vähem
First and Second Laws.- Thermodynamic Potentials and Derivative Properties.- Third Law and Thermochemistry.- Critical Phenomenon and Equations of States.- Phase Transitions, Melting and Reactions of Stoichiometric Phases.- Thermal Pressure, Earth's Interior and Adiabatic Processes.- Thermodynamics of Solutions.- Thermodynamic Solution Models: Non-electrolytes.- Equilibria Involving Solutions and Gaseous Mixtures.- Element Fractionation in Geological Systems.- Electrolyte Solutions and Electrochemistry.- Surface Effects.
Jibamitra Ganguly was educated in India (Calcutta University and Jadavpur University) and the University of Chicago, where he received his Ph.D. degree in Geophysical Sciences. This was followed by post-doctoral research at the Yale University and the University of California, Los Angeles, and an appointment to a faculty position at the University of Arizona, where he is currently a Professor Emeritus of Geosciences. His research, which covers a wide range of areas in the Earth and Planetary sciences, has been characterized by an effective blend of experimental, theoretical and observational studies to develop quantitative understanding of natural processes. Prof. Ganguly co-authored (with Prof. S. K. Saxena) the book Mixtures and Mineral Reactions, and edited the volume Diffusion, Atomic Ordering and Mass Transport. He is a fellow of the Mineralogical Society of America and the American Geophysical Union, and received the Alexander von Humboldt research prize for his contributions to thermodynamic and diffusion kinetic studies of natural systems.
Näita rohkemNäita vähem