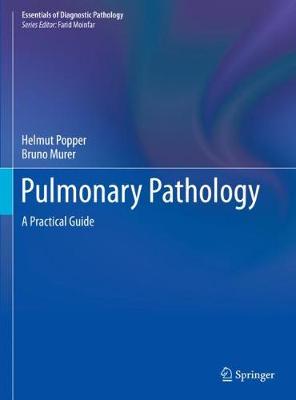 This book provides an up-to-date overview of diagnostics in lung and pleura pathology. It helps surgical and clinical pathologist solve problem cases in lung and pleura tumor pathology as well as in other fields of pulmonary/pleura pathology such as interstitial lung disease, rare tumors, metabolic diseases, infectious pneumonias, pneumoconiosis, drug induced lung diseases, developmental and pediatric pulmonary pathology. Focusing on practical issues and providing numerous illustrated examples of typical and atypical cases, it guides residents as well as experienced pathologists through the problems and pitfalls in pulmonary and pleura pathology. References have been kept to a minimum.

Näita rohkemNäita vähem
Carcinomas.- Sarcomas.- Lymphomas.- Benign Epithelial and Mesenchymal Tumors.- Preneoplasia Pneumonia.- Granulomatous Pneumonias.- Interstitial Pneumonia.- Eosinophilic Pneumonia.- Smoking Induced Lung Diseases.- Collagen Vascular Diseases.- Bronchitis Acute and Chronic.- Developmental Disorders.- Pneumoconiosis.- Systemic Vasculitis.- Pulmonary Hypertension.- Metabolic Disorders.- Emphysema.- Toxic Inhalation.- Drug Induced Lung Diseases.- Alveolar Hemorrhage.- Pleuritis.- Pleural Effusion.- Pleura Tumors.- Transplantation
Helmut H. Popper gained his medical degree from the Univesity of Graz, Austria, in 1973 and subsequently undertook residency and fellowship training at the university`s Institute of Pathology. In 1985, he became an associate professor of pathology there and a year later, head of the Laboratory of Experimental Pathology. In 1993, Dr. Popper was appointed professor of pathology. Subsequent appointments in 2000 and 2008 were as head of Laboratories of Molecular Cytogenetics and Environmental and Respiratory Tract Pathology and head of the Research Unit for Molecular Lung and Pleural Pathology. He has held a number of prestitious positions during his career, including as chairman of the Pulmonary Pathology group of the European Society of Pathology and president of the Austrian Society of pathology. He is a member of the Executive Advisory Board of the Archives of Pathology and the Laboratory Medicine and a member of the editorial board of Virchows Archiv. He has received awards andmedals for continous medical education from the Swedish Medical Society, the Russian and Turkish Thoracic Societies, and the Italian Pathological Society. Bruno Murer graduated in medicine from the University of Ferrara, Italy, in 1975. From 1976 to 1988, he was assistant director and from 1988 to 1993, associated director of the Department of Anatomic Pathology at the University of Ancona, Italy. Currently, Dr. Murer is director of the Anatomic pathology unit at the University of Mestre, Venice, Italy. He is a member of the Italian Society of Pathology and the American-Canadian Academy of Pathology and editorial board member of several journals. He has authored more than 150 scientific articles in national and international journals.
Näita rohkemNäita vähem