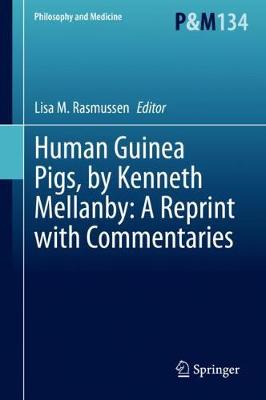 This book reprints Human Guinea Pigs, by Kenneth Mellanby, a seminal work in the history of medical ethics and human subject research that has been nearly unavailable for over 40 years.&nbsp; Detailing the use of World War II conscientious objectors who volunteered for experimentation on scabies transmission, Mellanby’s book offers insight into one approach to human subject experimentation before the development of ethical oversight regulations. His work was initially published prior to the articulation of the Nuremberg Code, which makes his subsequent position as a reporter for the British Medical Journal at the Nuremberg Trials very interesting, particularly given his sometimes controversial opinions on Nazi medical experimentation. This book reprints the second edition together with commentary essays that situate Mellanby’s ethical approach in historical context and relative to contemporary approaches. This volume is of particular interest to scholars of the history of human subject research.

Näita rohkemNäita vähem
1. Preface (Editor).-
2. Introduction to text (Editor).-
3. Reprint of Human Guinea Pigs, 2nd edition with additions noted.-
4. Critical Essays.
Lisa M. Rasmussen earned her PhD in Philosophy (with a focus on bioethics) from Rice University ,and is currently Associate Professor in the Department of Philosophy and Factuly Fellow in the Graduate School at the University of North Carolina, Charlotte. One of Dr. Rasmussen's main research areas is research ethics, particularly research misconduct and federal regulatory approaches to ethical issues in research. She is presently working on a book manuscript on unregulated human subject research, and serves as Editor of the book series Philosophy and Medicine.
Näita rohkemNäita vähem