Because Internet: Understanding how language is changing [Pehme köide] 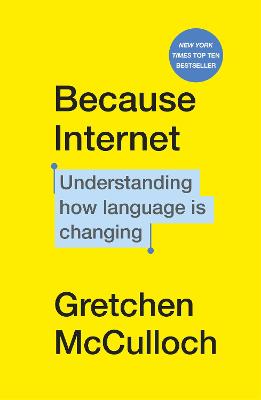 Suurem pilt
Teised raamatud teemal:
Püsilink: https://www.kriso.ee/db/9781529112825.html
Märksõnad:
THE ACCLAIMED NEW YORK TIMES BESTSELLER. Have you ever puzzled over how to punctuate a text message? Wondered where memes came from? Fret no more: Because Internet is the perfect book for understanding how the internet is changing the English language, why that's a good thing, and what our online interactions reveal about who we are. 'McCulloch is such a disarming writer - lucid, friendly, unequivocally excited about her subject - that I began to marvel at the flexibility of the online language she describes, with its numerous shades of subtlety.' New York Times
Näita rohkemNäita vähem

A compelling narrative rich with examples from her own online activities, a healthy dose of humor, and plenty of cat memes... the breadth of topics covered-from conversation analysis to meme culture to the development of texting as we now know it-makes this book useful, engaging, and enjoyable. * Science * An effervescent study of how the digital world is transfiguring English * The New Yorker * McCulloch's book is a good start in guiding readers to consider the wild language of the internet as a thing of wonder-a valuable feature, not a bug. * Wall Street Journal * Rather than obsessing about what the internet is doing to language, [ Because Internet] largely focuses on what can be learned about language from the internet. . . . McCulloch's book is about the birth of a new medium. * Economist * McCulloch is such a disarming writer - lucid, friendly, unequivocally excited about her subject * New York Times * In prose at once scholarly and user-friendly, McCulloch unpacks the evolution of language in the digital age, providing a comprehensive survey of everything from the secret language of emojis to the appeal of animal memes. * Esquire * McCulloch offers a compelling snapshot of a world in flux, from which readers will learn a lot about language, the internet and themselves * Financial Times * A fascinating analysis * Observer * Covers the backstory of how tildes became the punctuation mark for ~whimsy and sarcasm~...and when we started repeating certainnnnn lettersssssssss for emphasis * Buzzfeed * Because Internet...illustrates how many of us feel about English in the online age... It is hard not to be moved by her McCulloch is an engaging writer who clearly adores her subject * Sunday Times *

A fizzing take on how the internet is transforming language by the resident linguist at Wired. A critically acclaimed New York Times bestseller.
Gretchen McCulloch writes about linguistics for a general audience, especially internet language. She writes the Resident Linguist column at Wired. McCulloch has a master's in linguistics from McGill University, runs the blog All Things Linguistic, and cohosts the Lingthusiasm podcast. She lives in Montreal, but also on the internet. www.gretchenmcculloch.com
Näita rohkemNäita vähem