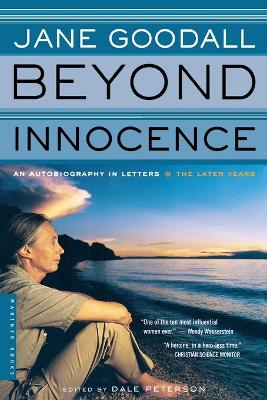 Suurem pilt
Teised raamatud teemal:
Püsilink: https://www.kriso.ee/db/9780618257348.html
Märksõnad:
A second volume of Jane Goodall's autobiography in letters covers the years during which she made many of her most important discoveries on chimpanzee behavior, gave birth to her son, and became an environmental activist.

A second volume of letters by the renowned scientist chronicles her greatest triumphs and deepest tragedies, including her major discoveries about chimpanzee behvior, the breakup of her marriage to Hugo van Lawick, the birth and raising of her son, and her marriage to Derek Bryceson and his death. Reprint.


The second volume of Jane Goodall's remarkable self-portrait in letters, Beyond Innocence details some of the eminent scientist's greatest triumphs and her deepest tragedies. It covers the years following the publication of her groundbreaking book In the Shadow of Man, which, along with her articles in National Geographic, made her famous. Goodall's candid letters recount major events in her life and research, including her astonishing discoveries about chimpanzee behavior, the birth and raising of her son, the breakup of her marriage to Hugo van Lawick, the kidnapping by guerrillas of a group of her students, her marriage to Derek Bryceson and his death, and her growing concern about the future of her beloved chimpanzees at Gombe and elsewhere in the world. Beyond Innocence tells how many of the dreams of Goodall's youth were shattered, but also how she changed from a rather private observer to a public crusader.
Näita rohkemNäita vähem
Näita rohkemNäita vähem
Logi sisse Registreeri