Beyond Pluto: Exploring the Outer Limits of the Solar System [Kõva köide] 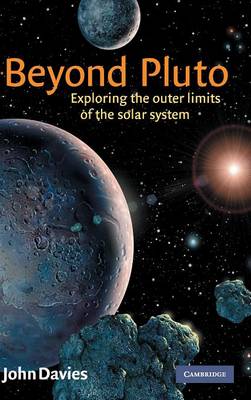 Suurem pilt
Teised raamatud teemal:
Püsilink: https://www.kriso.ee/db/9780521800198.html
Märksõnad:
In the last few years, more and more is becoming known about a population of small planetary objects, beyond the orbit of Pluto, which has become known as the Kuiper Belt. From the first speculations about comets on the outer reaches of the solar system by Kenneth Edgeworth in 1943, to the current efforts of NASA to build and deploy the exploratory spacecraft dubbed the "Pluto-Kuiper Express," Davies (Astronomy Technology Centre, Edinburgh, UK) tells the story of the various astronomer who have observed and theorized about the most remote known bodies of the solar system. Integral to the story, of course, is explanations of the scientific methods and theories that were a focus of the scientists' lives. Annotation c. Book News, Inc., Portland, OR (booknews.com)

Exactly what is beyond Pluto? Why, in the last ten years, has the Solar System more than doubled in size? For the first time, in almost two centuries, an entirely new population of planetary objects has been found that may well explain these two questions. This newly discovered realm of minor planets, now known as the "Kuiper Belt," has reconceptualized our understanding of how the Solar System was formed and has finally given ontological explanations for the enigmatic outer planet Pluto. Beyond Pluto is the fascinating story of how a group of theoretical physicists decided that there must be a population of unknown bodies beyond Pluto and how a small band of astronomers set out to find them. Acclaimed scientist John K. Davies recounts how they predicted the existence of these planetary bodies, how they were eventually discovered, and how Pluto was named. In addition, Davies provides biographies of the astronomers who discovered these new worlds and information on the telescopes they used. John K. Davies is a support scientist for the UK Infrared Telescope (UKIRT) atop the dormant volcano Mauna Kea in Hawaii. He holds PhDs in chemistry and astronomy, discovered six comets while teaching at Leicester University in the UK, and was a member of the ISO-CAM team at the Royal Observatory in Edinburgh, Scotland. He has contributed to magazines such as Astronomy, New Scientist, Sky & Telescope, and Space. In 2000, a small main asteroid belt was named Johndavies in recognition of his numerous contributions to astronomy.
Näita rohkemNäita vähem

Review of the hardback: '... a pleasing book with an elegant style ...'. Astronomy & Geophysics Review of the hardback: 'Beyond Pluto is a candid, detailed and well illustrated book that takes the general reader on an intriguing journey to the far frontiers of astronomical research.' David Hughes, New Scientist Review of the hardback: '... a must for comet enthusiasts and armchair astronomers wishing to gain a sense of what the outermost provinces of the Sun's dominion may be like.' Neil English, Astronomy Now Review of the hardback: '... there is something here for everyone. For the non-professional, Davies discusses the tools and art of astronomical research in a practical manner ... For the expert and research astronomer, this account provides context for the ongoing work in the field as well as an excellent overview of the driving questions and current state of knowledge ... it is a pleasure to have a book that is readable at so many levels and able to describe the concepts and relevance of such a new field of research.' Joel Wm. Parker, Nature Review of the hardback: '... an overview of a rapidly developing research that is accessible to the non-specialist and as such is particularly welcome. Anyone interested in solar system studies and the formation and evolution of the planets will want to buy this book.' Richard Taylor, Spaceflight Review of the hardback: 'A modern story of scientific discovery, showing how theory and practice interact.' Europe & Astronomy Review of the hardback: 'The book gives an accessible account of the historical context of research into objects beyond Pluto. ... what brings the book to life is the fascinating insight Davies gives into the nomadic existence of young professional astronomers, the excitement of observations which confirm orbital predictions, the frustration of having not quite enough clout to get crucial telescope time, and the ingenious ways of making the most of what resources they do get. ... Anyone wanting an insider's account of this continuing voyage of discovery should read Davies' book. Thoroughly recommended.' Newsletter of the Federation of Astronomical Societies Review of the hardback: '... an immensely enjoyable read.' Simon Green, The Observatory

An engaging story of modern scientific discovery: exploring the frozen frontier of our solar system.

John Davies is an astronomer at the Joint Astronomy Centre in Hilo, Hawaii. His research focuses on small solar system objects. In 1983 he discovered six new comets with the Infrared Astronomy Satellite (IRAS) and since then he has studied numerous comets and asteroids with ground and space based telescopes.
Näita rohkemNäita vähem
Logi sisse Registreeri