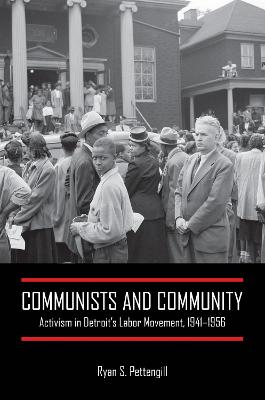 Communists and Community seeks to reframe the traditional chronology of the Communist Party in the United States as a means to better understand the change that occurred in community activism in the mid-twentieth century. Ryan Pettengill argues that Popular Front activism continued to flourish throughout the war years and into the postwar period. In Detroit, where there was a critical mass of heavy industry, Communist Party activists mobilized support for civil rights and affordable housing, brought attention to police brutality, sought protection for the foreign-born, and led a movement for world peace.&#160;

Communists and Community demonstrates that the Communist Party created a social space where activists became effective advocates for the socioeconomic betterment of a multiracial work force. Pettengill uses Detroit as a case study to examine how communist activists and their sympathizers maintained a community to enhance the quality of life for the city&;s working class. He investigates the long-term effects of organized labor&;s decision to force communists out of the unions and abandon community-based activism. Communists and Community recounts how leftists helped workers, people of color, and other under-represented groups became part of the mainstream citizenry in America.

"Move over, Saul Alinsky! Communists and Community uncovers the hidden history of community organizing in Detroit before Alinsky's version emerged. Pettengill's sharp portrait reveals working-class radicals attempting to connect community and workplace power struggles; these were overlooked because Communist Party history was erased. From activism that began in bowling halls and clubs to campaigns for anti-police brutality and civil rights, Pettengill shows that direct action outside the workplace was a vital part of the quest for working-class power. He also rewrites the history of postwar conservatism by showing that right-wing community activists prevailed in part because of the removal of radicals during the Cold War who had acted as a bridge between labor and community struggles."-Rosemary Feurer, Associate Professor of History at Northern Illinois University and author of Radical Unionism in the Midwest, 1900-1950 "Communists and Community greatly contributes to our understanding of an understudied period of U.S. communism. In this excellent monograph, Ryan Pettengill-utilizing extensive archival sources, including Detroit Red Squad records-recounts the important role Communists played in a variety of union and community-based coalitions devoted to fighting racism, wartime price and rent gouging, labor and housing discrimination, and police brutality. According to Pettengill, those alliances unfortunately did not survive the party-line shifts and the Cold War purges of the left, thus destroying the possibility of achieving a more inclusive and just social and economic order."-Gerald Zahavi, Professor of History at the University at Albany, SUNY, and author of Workers, Managers, and Welfare Capitalism: The Shoeworkers and Tanners of Endicott Johnson, 1890-1950