Decision for Disaster: Betrayal at the Bay of Pigs illustrated edition [Pehme köide] 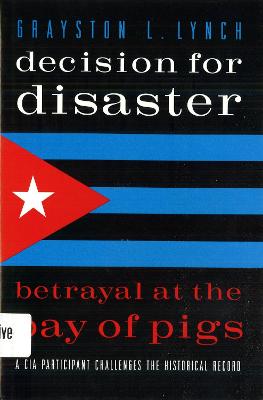 "Grabs and retains the reader's attention with fastpaced action, convincing tactical commentary, tales of bravery, a few accounts of cowardice, and the story of a brutal, tragic end to the enterprise." "Gray Lynch was there at the Bay of Pigs and was in perfect position to write the definitive ground-level account of what went right and what went wrong. His anger toward the men at the top is the anger of a patriot who feels he was betrayed. This is not a book for those who love Camelot." "This book is his testimony--a devastating corrective to the historical pseudo-record." "A rousing military adventure written by one of the [ CIA's] best and bravest....Convincing and infuriating."

Näita rohkemNäita vähem
Grayston L. Lynch is a retired U.S. Army captain and a former CIA officer. He was wounded at Normandy, the Battle of the Bulge, and Heartbreak Ridge in Korea; served with the Special Forces in Laos; and received three Purple Hearts, two Silver Stars and one Bronze Star with a "V" for valor, among other awards. He joined the CIA in 1960. For his heroism at the Bay of Pigs, Lynch was awarded the Intelligence Star, the CIA's most coveted award. In the six years after the Bay of Pigs, he ran commando raids into Cuba. Lynch retired from the CIA in 1971.
Näita rohkemNäita vähem
Logi sisse Registreeri