Dreams Of A Final Theory: The Search for The Fundamental Laws of Nature New edition [Pehme köide] 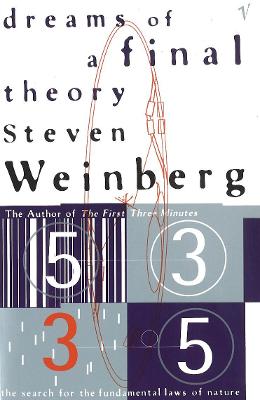 Suurem pilt
Teised raamatud teemal:
Püsilink: https://www.kriso.ee/db/9780099223917.html
Märksõnad:
An understanding of nature's final laws may be within our grasp - a way of explaining forces and symmetries and articles that does not require further explanation. 'This starting point, to which all explanations can be traced, is what I mean by a final theory', says Steven Weinberg in this extraordinary book. In it he discusses beauty, the weakness of philosophy, the best ideas in physics and the honour of accepting a world without god.
Näita rohkemNäita vähem

This is a brilliant book * Daily Telegraph * A truly important book, one which tries to change our minds... A magnificently honest piece of work * Times Literary Supplement * Highly literate, comprehensive, challenging, a survey of an exciting and extraordinary field of enquiry by one of its leading figures * Financial Times * Wienberg has reached the pinnacle of scientific succes - the Nobel Prize - he writes clearly and with confidence, imbuing the reader with an irresistible sense that one is in the hands of a master physicist at play * Sunday Times *

Weinberg's career has gone from boy wonder to Nobel laureate (Physics, 1979) to sage among particle physicists, combining creative talents with a zeal to explain. In The First Three Minutes (1977), he popularized Big Bang cosmology, in particular the symmetry-breaking changes and events that can account for the matter-fined universe around us. Now, 15 years later, he summarizes how far theory has gone toward uniting gravity, electromagnetism, and the weak and strong nuclear forces into a final theory. To accomplish this summary requires a masterful backing-and-filling of 20th-century physics, spelling out the role of Einstein in 1905 and 1917, Einstein's dispute with Bohr, the Copenhagen interpretation, the contributions of Heisenberg, Dirac, Schrodinger, and Feynman, and so on down to the younger generation of string and superstring theorists. This would be enough for a popularization, but Weinberg has something else in mind. He discusses, from an insider's point of view, the style of science, specifying concepts like beauty and simplicity, and the context of science, describing the social milieu that creates waves of belief (or disbelief) at given times. Mirabile dictu, he also devotes a chapter to religion, seeing its role as a consolation in the face of death - something science cannot offer. But the underlying theme and not-at-all-hidden agenda emphasizes that if we are going to make any headway toward a final theory, it can come about only with the discovery of entities such as the Higgs particle, using equipment like the Super Collider. While Weinberg justifiably extols the explanatory power of 20th-century quantum mechanics, then, he leaves the reader with the frustrating sense that politics, the recession, science-infighting, or any combination thereof may thwart the logical next step. He makes an eloquent case. (Kirkus Reviews)

A fascinating and controversial book about the minutiae that make up the universe and the possibility of a theory that might unite them all, by the author of a prize-winning account of the Big Bang, The First Three Minutes.
Steven Weinberg received the 1979 Nobel Prize for Physics for his work in unifying two of the fundamental forces of nature, and in 1991 he was awarded the National Medal of Science at the White House. His earlier prize-winning book The First Three Minutes is the classic account of the 'Big Bang,' and modern theory of the origin of the universe. Among his other books are The Theory Of Subatomic Particles and Gravitation and Cosmology: Principle and Applications of the General Theory of Relativity. Steven Weinberg is a member of the Royal Society of London as well as the US National Academy of Sciences, and has been awarded numerous honorary degrees, most recently from Columbia University and the Universities of Salamanca and Padua.
Näita rohkemNäita vähem
Logi sisse Registreeri