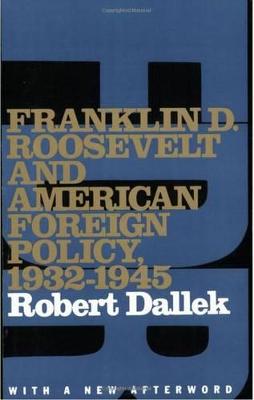 Since the original publication of this classic book in 1979, Roosevelt's foreign policy has come under attack on three main points: Was Roosevelt responsible for the confrontation with Japan that led to the attack at Pearl Harbor? Did Roosevelt "give away" Eastern Europe to Stalin and the U.S.S.R. at Yalta? And, most significantly, did Roosevelt abandon Europe's Jews to the Holocaust, making no direct effort to aid them?

In a new Afterword to his definitive history, Dallek vigorously and brilliantly defends Roosevelt's policy. He emphasizes how Roosevelt operated as a master politician in maintaining a national consensus for his foreign policy throughout his presidency and how he brilliantly achieved his policy and military goals.
Näita rohkemNäita vähem

A dazzling narrative...elegant...history on the grandest scale, embracing a world-wide cast of characters and all the continents....All the heroes and villains of the day before yesterday are alive again in these pages-particularly Churchill, Stalin, DeGaulle, and Chiang. * New York Times Book Review *