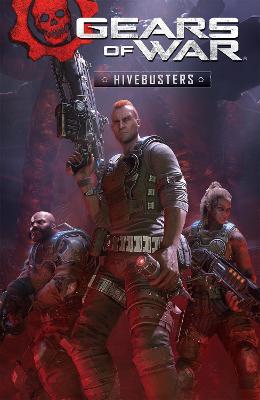 All first printings include a download code to access the "Hivebusters Bundle," which contains the Mechanic Mac skin as well as a banner of the Hivebusters cover art.

After successfully busting a Swarm hive on the remote island of Pahanu, this suicide squad will face their most dangerous mission yet--going after the Swarm that decimated the home settlement of one of their own! As Mac seeks to take revenge against the monsters that wiped out his hometown, tempers rise as Keegan and Lahni try to keep the team on track, but are they on a collision course with certain death?

Set on the fictional planet of Sera, the Gears of War series charts the story of humanity's struggle against an army of monstrous, fearsome, and brutal adversaries through a captivating tale of hope, comradery, and survival.
Näita rohkemNäita vähem

"The art in Gears of War: Hivebusters is some of the best I've seen, period. Alan Quah has done an amazing job delivering what the world looks like." --ButWhyTho

Prepare for the Gears 5 game with this pulse-pounding mission and a whole new squad!
Kurtis J. Wiebe is an author based in British Columbia who's been established in the world of comic writing since 2009. For his contribution to the critically acclaimed Green Wake, Kurtis was presented with the Shuster Award for Outstanding Comic Book Writer. Never satisfied with a specific style of writing, Kurtis has branched out to novels, videogames, and screenplays. He spends his days at home, writing about the mad things that float around his brain, and occasionally escapes to various cities around North America to promote his projects.
Näita rohkemNäita vähem
Logi sisse Registreeri