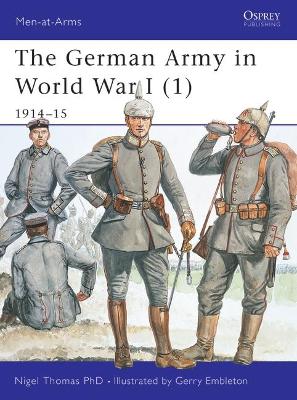 Suurem pilt
Teised raamatud teemal:
Püsilink: https://www.kriso.ee/db/9781841765655.html
Märksõnad:
In August 1914 the mobilization of Imperial Germany's 800,000-strong army ushered in the first great war of the modern age - a war which still stands as the greatest slaughter of soldiers in history. That German Army is also the best example of a particular period of military thought, when virtually the whole manpower of the European nations was integrated into mass conscript armies, supported by several age categories of reservists and by dedicated industrial and transport systems. In this first of three volumes the author offers an extraordinary mass of information, in text and tables, illustrated by photographs and colour plates.
Näita rohkemNäita vähem

"...beautifull illustrated and the eight color plates show off a variety of WWI uniforms/equipment that are appropriate for armies that fought in the RCW...fills a very necessary spot in my wargaming library... As always, Osprey books form the first line of any 'attack' on a new period of study!" --HMG Reviewing Stand

Näita rohkemNäita vähem
Overview - the German forces, August 1914 - September 1915; the high command; the four national contingents; organization - the Field Army, the Replacement Army; operations, August 1914 -September 1915 - Western Front, Eastern Front; uniforms - orders of dress, officers and other ranks, 1914 ceremonial, 1907-10 field, training and fatigue - special clothing; rank insignia; branch and unit insignia tables - orders of dress; rank insignia - branch and regimental insignia 1914-15; orders of battle.
Dr Nigel Thomas is an accomplished linguist and military historian and is currently a Senior Lecturer in charge of the Business Language Unit at the University of Northumbria, Newcastle. His interests are 20th century military and civil uniformed organisations, with a special interest in Germany, Central and Eastern Europe. He was recently awarded a PhD on the Eastern Enlargement of NATO. Gerry Embleton has been a leading historical illustrator since the early 1970s. Gerry specialises in the medieval period, but has a keen interest in the 18th, 19th and 20th centuries. An illustrator and author of a number of Osprey titles, he now lives in Switzerland.
Näita rohkemNäita vähem