Goodness Paradox: How Evolution Made Us Both More and Less Violent Main [Pehme köide] 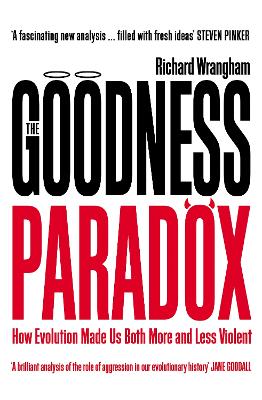 Suurem pilt
Teised raamatud teemal:
Püsilink: https://www.kriso.ee/db/9781781255841.html
Märksõnad:
'A fascinating new analysis of human violence, filled with fresh ideas and gripping evidence from our primate cousins, historical forebears, and contemporary neighbors' Steven Pinker 'A brilliant analysis of the role of aggression in our evolutionary history' Jane Goodall It may not always seem so, but day-to-day interactions between individual humans are extraordinarily peaceful. That is not to say that we are perfect, just far less violent than most animals, especially our closest relatives, the chimpanzee and their legendarily docile cousins, the Bonobo. Perhaps surprisingly, we rape, maim, and kill many fewer of our neighbours than all other primates and almost all undomesticated animals. But there is one form of violence that humans exceed all other animals in by several degrees: organized proactive violence against other groups of humans. It seems, we are the only animal that goes to war. In the Goodness Paradox, Richard Wrangham wrestles with this paradox at the heart of human behaviour. Drawing on new research by geneticists, neuroscientists, primatologists, and archaeologists, he shows that what domesticated our species was nothing less than the invention of capital punishment which eliminated the least cooperative and most aggressive among us. But that development is exactly what laid the groundwork for the worst of our atrocities.
Näita rohkemNäita vähem

Professor Richard Wrangham advances a provocative new theory of what makes human civilisation special: the nature of our violence.
Richard Wrangham is Ruth B. Moore Professor of Biological Anthropology, Harvard University. He is the author of Catching Fire: How Cooking Made Us Human, and Demonic Males: Apes and the Origins of Human Violence (with Dale Peterson). Professor Wrangham is a leader in primate behavioral ecology. He is the recipient of the Rivers Memorial Medal from the Royal Anthropological Institute and a MacArthur Foundation Fellowship. He is a fellow of the American Academy of Arts and Sciences and the British Academy.
Näita rohkemNäita vähem
Logi sisse Registreeri