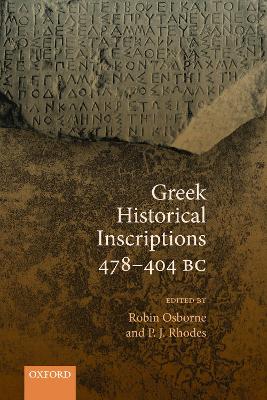 Suurem pilt
Teised raamatud teemal:
Püsilink: https://www.kriso.ee/db/9780198854456.html
Märksõnad:
This volume is both a companion to the editors' Greek Historical Inscriptions, 404-323 BC, and a successor to the later part of the Selection of Greek Historical Inscriptions to the End of the Fifth Century BC, edited by Russell Meiggs and David M. Lewis and published in 1969. As with the editors' earlier collection, it seeks to make a selection of historically significant inscribed texts accessible to scholars and students of fifth-century Greek history.

Since the publication of Meiggs and Lewis' collection, a number of significant new inscriptions and fragments have been unearthed and new interpretations of previously known examples developed. As well as updating the scholarly corpus, this volume aims to broaden the thematic range of inscriptions discussed and to include a greater selection of material from outside Athens, while still adhering to the intention of presenting texts which are important not just as typical of their genre but in their own right. In doing so, it offers an entry point to all aspects of fifth-century history, from political and institutional, to social, economic, and religious, and in order to make the material as accessible as possible for a broad readership concerned with the study of these areas, the Greek texts are presented here alongside both English translations and incisive commentaries, which will be of utility both to the specialist academic and to those less familiar with the areas in question. The inclusion of photographs depicting inscribed stones and bronzes complements discussion of the inscriptions themselves and enables parallel consideration of their nature, appearance, and transmission history, resulting in a work of thoroughly comprehensive, cutting-edge scholarship and an invaluable reference text for the study of fifth-century Greek history.
Näita rohkemNäita vähem

[ A] general introduction to epigraphical evidence and its uses; a new, enlarged selection of appropriate documents; facing translations of them all (as already in RO); detailed commentaries, incorporating up-to-date bibliography; three maps; seventeen plates. How any of this could have been done significantly better is very hard to see. It is quite superb. * David Whitehead, CJ-Online * This highly anticipated anthology . . . is in every respect an absolute success . . . There is no doubt that for the next half-century this new edition of the Greek Historical Inscriptions will be the epigraphic and historical reference of the fifth century. * Patrice Brun, Bryn Mawr Classical Review [ translated] *