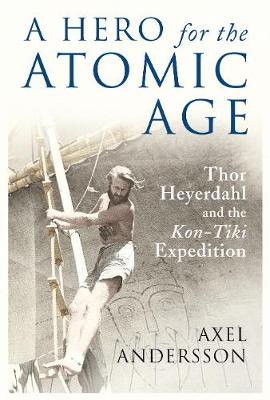 In English and many other languages the name ‘Kon-Tiki’ has become a byword for adventure and the exotic. The journey of the Kon-Tiki from Peru to Polynesia in 1947 became one of the founding myths of the postwar world. In the voyage of six Scandinavians and a parrot on a balsa raft across the Pacific Ocean the classic journey of discovery was re-invented for generations to come. Kon-Tiki spoke of heroism, masculinity, free-spirited rebellion against scientific dogmatism, and the promise of an attainable exotic world, while it updated these mythological staples to fit the times. After years of relentless media exploitation of the 101-day raft journey, Heyerdahl emerged as the protagonist in a legend that helped to create a new postwar West.
A Hero for the Atomic Age tells the story of how Heyerdahl organized an expedition to sail a balsa raft from Callao in Peru to the Tuamotu Islands in French Polynesia, and explains how he turned this physical crossing into an epic narrative that became imbued with a universal appeal. The book also addresses, for the first time, the problematic nature of Heyerdahl’s theory that a white culture-bearing race had initiated all the world’s great civilizations.
Näita rohkemNäita vähem

'This wonderful, original book offers a major contribution to the politics of race and racism, to the history of the Cold War and to the emergent field of Atlantic Studies.' - Professor Paul Gilroy, London School of Economics and Political Science.

Näita rohkemNäita vähem
Contents: The Man and the Myth - Making the Kon-Tiki - From Raft to Brand - The Seamless Craft of Writing Legend - To Review a Classic - The Kon-Tiki Film and the Return to Realism - A Lone Hero of Adventurous Science - White Primitives and the Art of Being Exotic to Oneself - The New Postwar Sea and the Pacific Frontier.
Axel Andersson is a young Swedish historian and writer who has been fascinated by Heyerdahl and the Kon-Tiki since childhood. After attending school in Norway and graduating from the University of Edinburgh he completed his doctoral studies at the European University Institute, Florence, where he investigated the origins of the Kon-Tiki expedition and its abiding importance for the popular imagination.
Näita rohkemNäita vähem