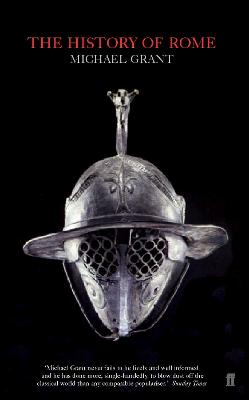 Suurem pilt
Teised raamatud teemal:
Püsilink: https://www.kriso.ee/db/9780571114610.html
Märksõnad:
From a small Iron Age settlement on the banks of the Tiber, Rome grew to become the centre of an Empire that dominated the Western world.

From a small Iron Age settlement on the banks of the Tiber, Rome grew to become the centre of an Empire that dominated the Western world. Powerful in war, Rome was magnificent in peace, so that even today her poets, artists, philosophers and historians exert their influence over Western thought and civilisation.Michael Grant, the renowned classical historian, recreates the evolution of this astonishing city and community. He describes the individuals and events that made Rome a political and cultural conqueror, and defines the dramatic circumstances of her eventual decline and fall.
Näita rohkemNäita vähem

The author of several popular histories of the ancient world, Michael Grant here narrates the history of Rome from the city's days as an Etruscan village to the Western empire's dissolution in the 5th century. Concentrating on the vicissitudes of political leadership and economic life, he shows Roman culture to have been deeply conservative and authoritarian by virtue of its rigid patriarchy and politicized religion. The resulting public order gave Rome a strong local base as a seat of power and helped nourish a tough political spirit, which flourished in the Republic, then passed into the Empire where eventually it died. The decisive turn in Roman history, for Grant, was not therefore the passage from Republic to Empire and one-man rule - this inevitably resulted from the Republic's political and economic weaknesses. Nor was the turning point a weakening of public morals or the rise of decadent emperors. Rather, the clue to Rome's decline lay in the Empire's expansion beyond its economic means of support, which forced the government to wrest funds from its citizens, thus alienating the rich and ruining the poor. The Empire finally became an armed camp threatened from without and seething with resentment inside. The once - vital political life could not survive in such circumstances: the institutional death of the Empire only reflected this internal political death. Though nicely written and broadly informed, Grant's narrative lacks the reach and enlivening detail, the fresh perceptions and sureness required to make another history of Rome thoroughly worth reading (as Hooper's is, below). (Kirkus Reviews)

The History of Rome by Michael Grant - the renowned classical historian - recreates the evolution of one of the world's most astonishing cities and communities.
Michael Grant (1914-2004) was a historian whose over forty publications on ancient Rome and Greece popularised the classical and early Christian world. He studied at Trinity College, Cambridge, served in intelligence and as a diplomat during the Second World War, and afterwards became deputy director of the British Council's European division, when he also published his first book. He later returned to academia, teaching at Cambridge and Edinburgh, and serving as Vice Chancellor at the University of Khartoum and at Queen's University, Belfast.
Näita rohkemNäita vähem