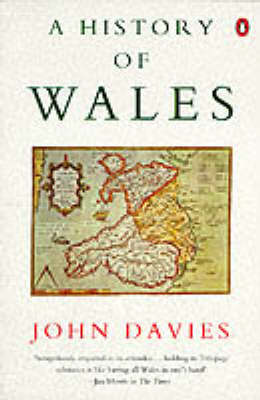 Suurem pilt
Teised raamatud teemal:
Püsilink: https://www.kriso.ee/db/9780140145816.html
Märksõnad:
This account traces the history of Wales, from the earliest times to the late-20th century. From the first Welshmen at Ffynnon Beuno to the miners' strike, from the Red Lady of Paviland to the establishment of the Welsh television channel, from the end of the Ice Age to the politics of today, this book is a comprehensive and detailed study of the whole span and history of Wales. John Davies won the Welsh Arts Council Book Prize for Non-Fiction in 1991 for the Welsh version of this book "Hanes Cymru", and he is also the author of "Cardiff and the Marquesses of Bute".
Näita rohkemNäita vähem

From the Ice Age until 1992: the story of Wales, expertly chronicled by renowned Welsh scholar Davies (Welsh History/University College of Wales). The Welsh can claim to be the original Britons. They preserved a language and culture - and, for many centuries, a legal code - that, along with their topographical isolation, kept them distinct from the Angles ("English"), Saxons, and later Norman invaders. The subjugation of WeLsh land by the English occurred in stages: the vanquishing of Llywelyn's revolution in 1282; the Act of Union in 1532; and the effects of the new commercial world that opened up after the Revolution of 1689 and led to the mixed blessings of the Industrial Revolution. Here, Davies relates the history of his people with proper pride. Avoiding sentimental generalizations and the temptation of portraying the Welsh as victims, he offers a closely written monument of scholarship lightened by flashes of dry humor. Davies sees radicalism as an important Welsh trait, exemplified in the Welsh role in the Chartist movement and, more recently, in the politics of the Liberal and Labor parties. He questions the common view that Methodism and Revivalism were authentic expressions of Welsh culture, and he points out that many Welsh migrated to America, especially to Pennsylvania, and that one-third of the signatories of the Declaration of Independence were their descendants. In the late 18th century, he adds, rumors abounded that America had been "discovered" in 1170 by a Welshman, one Madog, and that a tribe of Welsh-speaking Indians, the Madogwys, still dwelt deep within the continent. Davies devotes the last third of his book to the recent political scene in Wales, including the growth of the nationalist party, Plaid Cymru. He concludes that tenacity and adaptation to changed circumstances are the hallmarks of this nation, whose fullness is yet to be. Not for the casual reader - but a must for all who love to trace the story of an ancient people. (Kirkus Reviews)