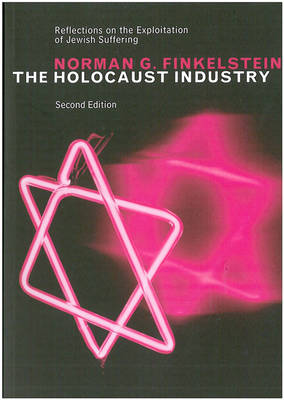 In an iconoclastic and controversial new study, Norman G. Finkelstein moves from an interrogation of the place the Holocaust has come to occupy in American culture to a disturbing examination of recent Holocaust compensation agreements. It was not until the Arab-Israeli War of 1967, when Israel's evident strength brought it into line with US foreign policy, that memory of the Holocaust began to acquire the exceptional prominence it enjoys today. Leaders of America's Jewish community were delighted that Israel was now deemed a major strategic asset and, Finkelstein contends, exploited the Holocaust to enhance this newfound status. Their subsequent interpretations of the tragedy are often at variance with actual historical events and are employed to deflect any criticism of Israel and its supporters. Recalling Holocaust fraudsters such as Jerzy Kosinski and Binjamin Wilkomirski, as well as the demagogic constructions of writers like Daniel Goldhagen, Finkelstein contends that the main danger posed to the memory of Nazism's victims comes not from the distortions of Holocaust deniers but from prominent, self-proclaimed guardians of Holocaust memory. Drawing on a wealth of untapped sources, he exposes the double shakedown of European countries as well as legitimate Jewish claimants, and concludes that the Holocaust industry has become an outright extortion racket. Thoroughly researched and closely argued, The Holocaust Industry is all the more disturbing and powerful because the issues it deals with are so rarely discussed.

This iconoclastic study was one of the most widely debated books of 2000. Finkelstein indicts with both vigor and honesty those who exploit the tragedy of the Holocaust for their own personal political and financial gain. In a devastating new postscript to this best-selling book, Norman G. Finkelstein documents the Holocaust industry's scandalous cover-up of the blackmail of Swiss banks, and in a new appendix demolishes an influential apologia for the Holocaust industry.
Näita rohkemNäita vähem

"... its courageous attacks on the financial extortions of groups like the W[ orld] J[ ewish] C[ ongress] are of great importance and, one hopes, will have an impact. Its strident tone, attacked by the books most hostile critics, strikes me as highly appropriate, especially given the author's careful sourcing of most of his claims." - Professor William Rubenstein, University of Wales "These fraudsters need to be unmasked, and Finkelstein believes that he is the man to do it. In 150 short pages he sets out to expose their machinations. If his indictment is a true one, it should prompt prosecutions, sackings, protest. The book shouts scandal. It is a polemic, communicated at maximum volume." - The Times "... Finkelstein has raised some important and uncomfortable issues ... examples cited ... can be breathtaking in their angry accuracy and irony." -- The Jewish Quarterly "Into this minefield, through which most have trodden perhaps a little too gingerly, has burst Norman Finkelstein, a Jew and self-professed iconoclast, heretic and enemy of the American-Jewish establishment - and he is lobbing grenades." - The Spectator "... a short, sharp and copiously noted polemic." - Times Higher Educational Supplement "Finkelstein is at his best when he skewers those who would sacralise the Holocaust." - Los Angeles Times Book Review "... his basic argument that the memories of the Holocaust are being debased is serious and should be given its due." - The Economist "The most explosive book of the year." - The Guardian "When I read Finkelstein's book, The Holocaust Industry, at the time of its appearance, I was in the middle of my own investigations of these matters, and I came to the conclusion that he was on the right track. I refer now to the part of the book that deals with the claims against the Swiss banks, and the other parts pertaining to forced labor. I would now say in retrospect that he was actually conservative, moderate and that his conclusions are trustworthy. He is a well-trained political scientist, has the ability to do the research, did it carefully, and has come up with the right results. I am by no means the only one who, in the coming months or years, will totally agree with Finkelstein's breakthrough" - Raul Hilberg comments on the first edition of The Holocaust Industry "... clever, explosive, sometimes even wryly funny." - Salon "This is, in short, a lucid, provocative and passionate book. Anyone with an open mind and an interest in the subject should ignore the critical brickbats and read what Finkelstein has to say." - New Statesman "... his allegations that some people are getting fat off the business sound plausible and, if he is prepared to back it up, worth saying." -Jewish Chronicle "He deserves to be heard... he is making some profound points that many younger and more thoughtful Jews have quietly been try to debate, but whose voices have been stilled by the establishment, particularly in the US." - Evening Standard "Finkelstein's downright pugilistic book delivers a wallop - mostly because few authors have had the courage of nerve to say, as he does, that the Nazi genocide has been distorted and robbed of its true moral lessons and instead has been put to use as 'an indispensable ideological weapon'. It's a provocative thesis that makes you want to reject it even as you are compelled to keep reading by the strength of his case and the bravura of his assertions." - LA Weekly "Finkelstein should be credited for writing a well-researched book that can help shut down the Holocaust Industry when the public becomes aware of its dishonesty and its vulgar exploitation of Jewish suffering." - Z Magazine "He is scathing in his denunciation of the institutions and individuals who have cropped up around the issue of reparations in the last several years." - New York Press "The reality of the Nazi holocaust remains. Memory can still enable us to recognise new victims, extend sensitivity and monitor signs of impending genocide. Books like The Holocaust Industry can help us if we let them." - Red Pepper

Norman Finkelstein currently teaches political science at DePaul University. He is the author of Image and Reality of the Israel-Palestine Conflict and (with Ruth Bettina Birn) A Nation on Trial, named a notable book for 1998 by the New York Times Book Review.
Näita rohkemNäita vähem
Logi sisse Registreeri