IBM and the Holocaust: The Strategic Alliance Between Nazi Germany and America's Most Powerful Corporation Enlarged edition [Pehme köide] 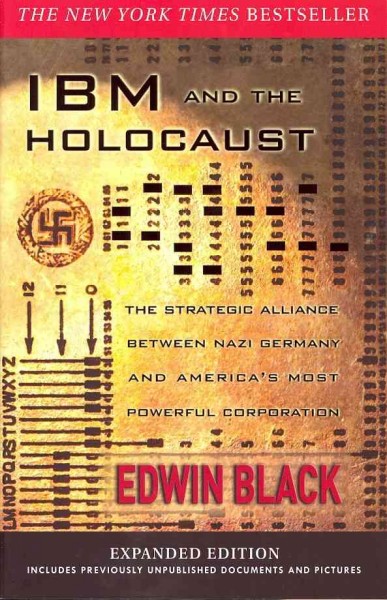 Suurem pilt
Teised raamatud teemal:
Püsilink: https://www.kriso.ee/db/9780914153276.html
IBM and the Holocaust is the award-winning, New York Times bestselling shocker--a million copies in print--detailing IBM's conscious co-planning and co-organizing of the Holocaust for the Nazis, all micromanaged by its president Thomas J Watson from New York and Paris. This Expanded Edition offers 37 pages of previous unpublished documents, pictures, internal company correspondence, and other archival materials to produce an even more explosive volume. Originally published to extraordinary praise in 2001, this provocative, award-winning international bestseller has stood the test of time as it chronicles the story of IBM's strategic alliance with Nazi Germany. IBM and the Holocaust provides nothing less than a chilling investigation into corporate complicity. Edwin Black's monumental research exposes how IBM and its subsidiaries helped create enabling technologies for the Nazis, step-by-step, from the identification and cataloging programs of the 1930s to the selections of the 1940s.
Näita rohkemNäita vähem

"An explosive book... Backed by exhaustive research, Black's case is simple and stunning: that IBM facilitated the identification and roundup of millions of Jews during the 12 years of the Third Reich ... Black's evidence may be the most damning to appear yet against a corporate accomplice." - Michael Hirsh, Newsweek. "Black clearly demonstrates that Nazi Germany employed IBM Hollerith punch-card machines to perform critical tasks in carrying out the Holocaust and the German war effort. He goes on to document that IBM managed to profit from Hitler's state throughout its existence. ... Black establishes beyond dispute that IBM Hollerith machines significantly advanced Nazi efforts to exterminate Jewry... IBM and the Holocaust is a valuable contribution to our understanding of the Holocaust." -- Christopher Simpson, Washington Post Book World. "Black's meticulous documentation constructs an undeniable fact: after the outbreak of WWII, the IBM corporation knew where each of its leased (not sold) machines was in Europe, and what revenues it could expect from them. Each machine was insured and serviced monthly. Even though Watson, under public pressure, returned his medal to Hitler, he continued to "micromanage" the German and European operations. Further, he fought to keep control of his German subsidiary, knowing full well the profits that would accrue to IBM as a result. He did this with the knowledge, fuller than most, of the purposes for which his machines were deployed... Remarkably, instead of indicting IBM, the Allies saw in these machines and their data a great opportunity to conduct a more efficient occupation of Germany and a rebuilding of Europe. Instead of evidence of crimes against humanity, the machines became an essential tool in the implementation of the Marshall Plan. In this way, IBM evaded any hint of complicity in the Holocaust. At least, until the publication of Edwin Black's book." -- Harvard International Review "An ugly story, hidden for years, told by a master craftsman ... compelling ... it's a chilling lesson." -- Richard Pachter, Miami Herald "IBM is haunted by its past. Edwin Black's book reveals the company's involvement in the Holocaust ! Previously the Nazi past of "Big Blue" was hardly ever a topic ! But now IBM is in the dock. Black's meticulous research documents just how precisely IBM managers were kept informed about the whereabouts of their machines." -- Christian Habbe, Der Spiegel, Germany