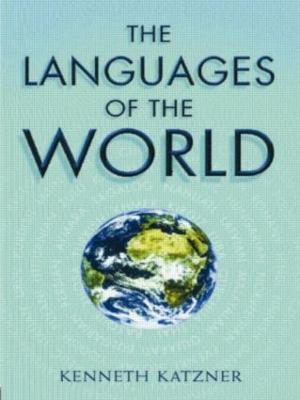 Suurem pilt
Teised raamatud teemal:
Raamatu kodulehekülg: http://www.routledge.com
Püsilink: https://www.kriso.ee/db/9780415250047.html
Märksõnad:
This third edition of Kenneth Katzner's best-selling guide to languages is essential reading for language enthusiasts everywhere. Written with the non-specialist in mind, its user-friendly style and layout, delightful original passages, and exotic scripts, will continue to fascinate the reader. This new edition has been thoroughly revised to include more languages, more countries, and up-to-date data on populations. Features include: *information on nearly 600 languages *individual descriptions of 200 languages, with sample passages and English translations *concise notes on where each language is spoken, its history, alphabet and pronunciation *coverage of every country in the world, its main language and speaker numbers
Näita rohkemNäita vähem

'A reference tool for all linguists as well as a collector's item for those in allied fields, enabling even an amateur to identify foreign scripts with ease and satisfaction ... to be recommended.' - Modern Language Review 'A wholly fascinating mini-kaleidoscope indicating the largely diverse variety of the world's main languages and their scripts and of their cultures.' - The Good Book Guide

Concise facts and figures on the main families of the world's many thousands of languages are followed by short extracts from 200 of those most widely used. The passages, accompanied by notes on each language's main characteristics, range from 'the verses of Vermana', written in the decorative script of Telugu, a language of the state of Andhra Pradesh in southeast India, to part of the Sermon on the Mount in Esperanto. The result is a wholly fascinating mini-kaleidoscope indicating the largely diverse variety of the world's main languages and their scripts and of their cultures. (Kirkus UK)

Prior to his recent retirement, Kenneth Katzner worked for the US government and also served as an editor on a number of international encyclopedias and English dictionaries. He is also author of a large English-Russian/Russian-English Dictionary.
Näita rohkemNäita vähem