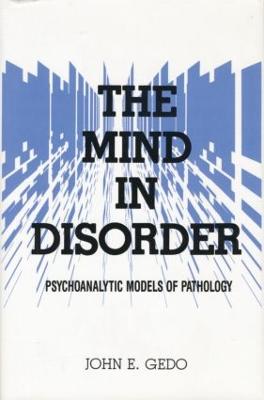 Anchoring his schema in the belief that nonorganic disorders are disturbances inadaptation explicable within a depth-psychological framework, Gedo posits two broad categories of functional disorder: "apraxias" that represent any failure to learn adaptively essential skills, and disorders of what her terms "obligatory repetition." Within both categories of disorder, Gedo avers, the vicissitudes of mental functioning are understandable in terms of regression to relatively archaic modes of function and the reversal of regression and return to expectable modes of adult function.

It follwos from Gedo's understanding of how and why the mind becomes disordered, that diagnosis utilizing psychoanalytic principles can only be based on the succession of transference constellations encountered in treatment, since these constellations invariably pinpoint the developmental impasses in which maladaptive repetitive patterns and the failure to learn basic psychological skills are rooted. For purposes of understanding a variety of apraxic and repetitive disorders, Gedo equates such basic skills not only with the three major psychobiological attainments he has invoked in the past, but with the development of adequate perception, cognition, affectivity, and communication skills.

Beautifullu organized, lucidly written, and richly illustrated with case vignettes,The Mind in Disorder is not only the thoughtful yield of an outstanding clinician's three decades of experience. It is also the first psychoanalytic book since Otto Fenichel's masterwork of 1945,The Psychoanalytic Theory of Neurosis, to take the issue of how we conceptualize psychopathology as its central focus.

"[ T]he vicissitudes of [ Gedo's concepts of apraxia and obligatory repetition] are wide-ranging, complex, richly textured expositions that inform and illuminate at every turn." - Psychoanalytic Books

Näita rohkemNäita vähem
1. Nosology and the Therapeutic Goals of Psychoanalysis
2. Masochism and the Repetition Compulsion
3. Epigenesis, Regressive Disorganization, and Reversibility
4. Developmental Arrest and the Borders of Integrated Functioning
5. Disruption of the Self-Organization as an Inability to Repeat
6. Regression, the Psychosomatic Barrier, and the Capacity to Symbolize
7. Repetitive Enactment as Symbolization and Self-Healing
8. Transitional Relationships, Adaptive Skills, and Autonomy in Behavior Regulation
9. Character, Dyadic Enactments, and the Need for Symbiosis
10. Transference Neurosis, Archaic Transference, and the Compulsion to Repeat
11. Intractable Character Pathology as the Convergence of Repetition and Apraxia
12. Apraxia and the Inability to Learn: A Reprise of Previous Work
13. Disorders of Communication: Language, Affects, and Vegetative Signs
14. Disorders of Thought: Magic and Obsessions
15. The Conundrum of Sexuality Epilogue: The Art of Psychoanalysis as a Technology of Instruction
John E. Gedo, M.D., is Training and Supervising Analyst, Chicago Institute for Psychoanalysis, and Clinical Professor of Psychiatry, University of Illinois School of Medicine. He is the author of numerous books, including Conceptual Issues in Psychoanalysis and Portraits of the Artist, both Analytic Press publications.
Näita rohkemNäita vähem