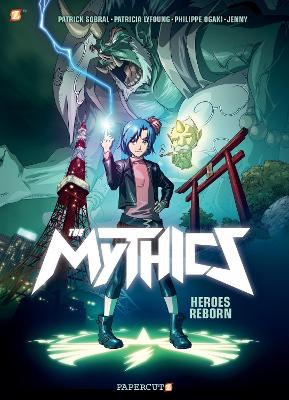 Suurem pilt
Teised raamatud teemal:
Püsilink: https://www.kriso.ee/db/9781545804346.html
Six teen descendants of powerful heroes who saved the ancient world from evil pretenders that they locked up on the Red Desert of Mars are pulled from their everyday lives to face the greatest threat that the contemporary world has ever known. Simultaneous. Illustrations.

In the ancient times of Gods and heroes, evil attempted to seize the world disguising themselves as six different gods. While they were spreading all their power of destruction, six heroes, each with extraordinary powers and brandishing sacred weapons, rose against these incarnations of evil. The evil was defeated and sealed in a secret place within the red desert on the planet Mars ...Today, enter six young heirs: Yuko of Japan, Parvati of India, Amir of Egypt, Abigail of Germany, Miguel of Mexico, and Neo of Greece suddenly pulled from their everyday lives. About to face the greatest threat that the contemporary world has ever known, in a flash, they get to discover just how worthy successors they may be of the ancient heroes.

Everyday kids become powerful and stop the spread of evil!
Näita rohkemNäita vähem
Philippe Ogaki Born in Agen in 1977, Philippe Ogaki has always dreamed of becoming a cartoonist. But not believing his dream is possible, he turned to studies in industrial design, which he later completed with a degree in interior design at Boulle school. Patricia Lyfoung Passionate very early about drawing, she did her graduate studies at the Estienne school then at the Gobelins in Paris. She first worked as a storyboard assistant at Marathon Animation on the Totally Spies series ! and Martin Mystery. She is the author of The Scarlet Rose from Papercutz. Patrick Sobral Patrick Sobral worked as a porcelain decorator for twelve years before devoting himself exclusively to the job of comic book author.
Näita rohkemNäita vähem
Logi sisse Registreeri