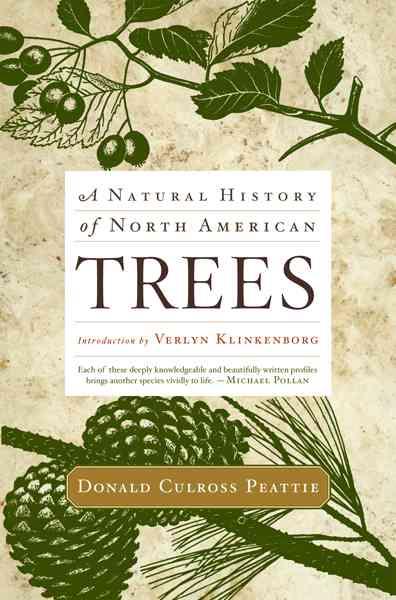 Suurem pilt
Teised raamatud teemal:
Püsilink: https://www.kriso.ee/db/9780618799046.html
Märksõnad:
Donald Culross Peattie's two books about American trees were first published in the 1950s. In this beautiful new one-volume edition, modern readers are introduced to one of the best nature writers of the last century. More than one hundred of the original illustrations by Paul Landacre highlight the eloquent and entertaining accounts of American trees. As we read Peattie's descriptions, we catch glimpses of our country's history and past daily life that no textbook could ever illuminate so vividly.
Here you'll learn about everything from how a species was discovered to the part it played in our country's history. Pioneers often stabled an animal in the hollow heart of an old sycamore, and the whole family might live there until they could build a log cabin. The tuliptree, the tallest native hardwood, is easier to work than most softwood trees; Daniel Boone carved a sixty-foot canoe from one tree to carry his family from Kentucky into Spanish territory. In the days before the Revolution, the British and the colonists waged an undeclared war over New England's white pines, which made the best tall masts for fighting ships.
It's fascinating to learn about the commercial uses of various woods -- for paper, fine furniture, fence posts, matchsticks, house framing, airplane wings, and dozens of other preplastic uses. But we cannot read this book without the occasional lump in our throats. The American elm was still alive when Peattie wrote, but as we read his account today we can see what caused its demise. Audubon's portrait of a pair of loving passenger pigeons in an American beech is considered by many to be his greatest painting. It certainly touched the poet in Donald Culross Peattie as he depicted the extinction of the passenger pigeon when the beech forest was destroyed.
A Natural History of North American Trees gives us a picture of life in America from its earliest days to the middle of the last century. The information is always interesting, though often heartbreaking. While Peattie looks for the better side of man's nature, he reports sorrowfully on the greed and waste that have doomed so much of America's virgin forest.
Näita rohkemNäita vähem