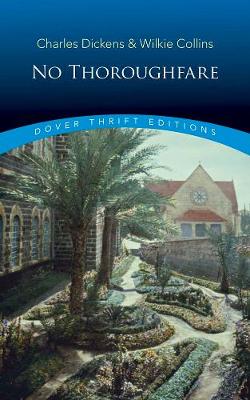 Suurem pilt
Teised raamatud teemal:
Püsilink: https://www.kriso.ee/db/9780486842196.html
Two foundlings at a Victorian hospital are assigned the same name, sowing the seeds for a case of mistaken identity. Written with the authors' customary sense of humor, adventure, and romance.

A distraught mother is forced to abandon her baby to a foundling hospital and begs to know the name that the authorities have given her child. She's told that his name is Walter Wilding, and upon her returns a dozen years later, it's Walter Wilding she adopts. Young Walter becomes a successful wine merchant and is content in his good fortune until his new housekeeper, a former nurse at the foundling hospital, confides a dark secret that brings his identity into question. Walter's attempts to solve the mystery of his existence lead to &#34;no thoroughfare,&#34; but a nefarious plot hatched by one of his business partners brings the truth to light.&#160;
Long-time friends Charles Dickens and Wilkie Collins collaborated on this novel, which began as a stage play. Ranging from darkest London to the frozen peaks of the Swiss Alps and the sunny shores of the Mediterranean, the tale reflects their penchant for adventure, humor, and romance.
Näita rohkemNäita vähem
Näita rohkemNäita vähem
Logi sisse Registreeri