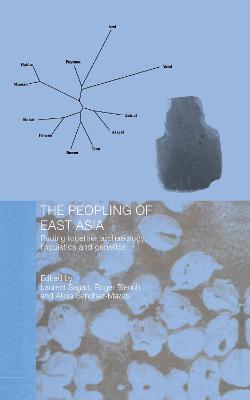 Suurem pilt
Teised raamatud teemal:
Raamatu kodulehekülg: http://www.routledge.com
Püsilink: https://www.kriso.ee/db/9780415322423.html
Märksõnad:
Unraveling the mystery of how East Asia was settled thousands of years ago is a task that requires contributions from archaeology, linguistics, and genetics. Recognizing this stat of affairs, Sagart (senior research, Centre National de la Recherche Scientifique, France), Blench (an independent scholar and consultant working in international development), and Sanchez-Mazas (population genetics, U. of Geneva, Switzerland) present 17 papers together reviewing recent advances from each of the fields in order to use findings from one field to pose problems for the interpretations of others and encourage cross-disciplinary cooperation. Among the topics discussed are archaeological evidence of the origin and dispersal of agriculture and human diaspora, recent discoveries at the Tapenkeng culture sites in Taiwan and the problem of Austronesian origins, the lexical and morphosyntactic evidence on Austric, the possible relationship between the genetic diversity of Taiwan's indigenous peoples and insular Southeast Asia, and a comparison of linguistic and genetic relationships among East Asian populations. Distributed in the US by Taylor & Francis. Annotation ©2005 Book News, Inc., Portland, OR (booknews.com)

One of the most dynamic research areas in the prehistory of East Asian regions is the synthesis of the findings of archaeology, linguistics and genetics. Several countries have only recently opened to field research and highly active local groups have made possible a raft of collaborative studies that would have been impossible even a decade ago. This book presents an overview of the most recent findings in all these fields. It will be of great interest to scholars of all disciplines working on the reconstruction of the East Asian past.
Näita rohkemNäita vähem
Laurent Sagart is Senior Researcher with the Centre National de la Recherche Scientifique, Paris, France. He is the author of three books and numerous articles on Chinese dialectology, Old Chinese phonology and morphology, comparative Chinese linguistics, and the Austronesian languages. Roger Blench is an independent scholar and consultant working in international development but also on language and prehistory. He has edited Language and Archaeology Vols. I-IV (Routledge, 1997-9) as well as a book on the history of African livestock. Alicia Sanchez-Mazas is Professor of Population Genetics and Anthropology at the University of Geneva, Switzerland. Her main research interest is the evolution of modern humans. She published many articles on worldwide genetic diversity and its relation to human peopling history.
Näita rohkemNäita vähem