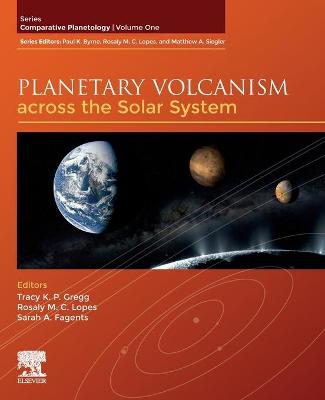 Planetary Volcanism across the Solar System compares and contrasts the vast array of planetary bodies in the Solar System, including Earth. The wealth of spacecraft data for almost all major solid-surface bodies in the Solar System indicate that volcanism has been a dominant mechanism in shaping the landscapes of these bodies. The book addresses key questions surrounding our understanding of planetary volcanism, such as how to integrate the data into a coherent view of how volcanic activity arises, how this mechanism shapes planets, which volcanic landforms are ubiquitous throughout the Solar System, and which are unique.

By placing a singular emphasis on comparing volcanic processes and landforms on all relevant Solar System bodies, and with the explicit objective of providing a systems-level understanding of this widespread phenomenon, users will find an up-to-date, accessible and comprehensive discussion of the major volcanic processes and landforms that shape and drive the evolution of planets, moons and smaller bodies.

Näita rohkemNäita vähem
1. Overview of Volcanism in the Solar System and Available Data
2. Effusive Volcanism (Observations and Processes)
3. Explosive Volcanism (Observations and Processes)
4. Cryovolcanism
5. Lava Compositions (Based on Observations)
6. Melt Production Mechanisms (Based on Modeling)
7. Determining the Ages of Planetary Volcanism
8. Planetary Crust Formation
9. Synthesis and Outlook
Tracy K.P. Gregg is an Assistant Professor at the University at Buffalo in Buffalo, New York, USA. Her Lava Lab research group examines volcanic processes in extreme environments, ranging from mid-ocean ridges to Jupiter's Moon, Io. She has co-edited 3 books on Solar System volcanism, published more than 30 peer-reviewed papers and maps, and has supervised over 3 dozen graduate students since 1998. She has served as the Chair of the Planetary Geology Division of the Geological Society of America, and the Volcano-Ice Commission of the International Association of Volcanology and Chemistry of Earth's Interior. She was elected to be a Fellow of the Geological Society of America in 2012 and recently received the Distinguished Service Award from the Planetary Geology Division of the Geological Society of America. Rosaly Lopes is a Senior Research Scientist at the Jet Propulsion Laboratory, where she is also Manager of the Planetary Science Section. An expert on planetary volcanism, she worked on the Galileo mission to Jupiter and is currently on the science team of the Cassini mission to Saturn. Her research expertise is on volcanoes in the Solar System, particularly the active volcanoes of Jupiter's moon Io and the ice volcanoes of Saturn's icy moons. She is a Fellow of the American Association for the Advancement of Science and the Geological Society of America, and the winner of the American Astronomical Society's 2005 Carl Sagan Medal. She has published seven books and over one hundred and twenty peer-reviewed publications Sarah Fagents is a Researcher in the Hawaii Institute of Geophysics and Planetology at the University of Hawaii at Manoa. She investigates volcanic features and eruption processes on the Earth and other planets, and is a member of the science team of the upcoming Mars 2020 rover mission. Her publications cover a wide range of volcanic subject matter, including magma-water interactions, explosive volcanism on Mars and Venus, lava flow dynamics and heat transfer, and cryovolcanism on Jupiter's moon Europa. She shares her enthusiasm for planetary volcanism with the public whenever possible.
Näita rohkemNäita vähem