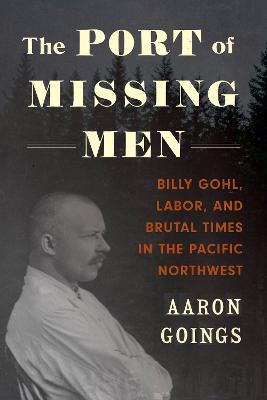 Suurem pilt
Teised raamatud teemal:
Püsilink: https://www.kriso.ee/db/9780295747415.html
Märksõnad:
"The true story behind a labor leader reputed to be a serial killer. Aaron Goings offers a vivid biography of Billy Gohl (1873-1927), a prominent union official in Grays Harbor, Washington who came to be known for killing dozens of people, maybe even more than one hundred. In a cruel twist, many victims were his union members. "These anonymous dead men, culled from the hordes of migrant laborers who had flocked to Grays Harbor to cut trees, came to be known as the floater fleet. Billy Gohl was credited with launching most of them," Murray Morgan wrote in The Last Wilderness: A History of the Olympic Peninsula. "If he was responsible for even half of the floaters found in the harbor during his day, Gohl was America's most prolific murderer. Over a ten-year period the fleet numbered 124." A union leader turned serial killer? As a labor historian, author Aaron Goings felt compelled to get to the bottom of the story. So he dug into the archives. In this popular biography, Goings uses Gohl's life to illuminate the brutal nature of everyday life in that era: the Yukon gold rush, the brutally dehumanizing lives of sailors and loggers, and the heated clashes between pro- and anti-union forces in Grays Harbor, the world's busiest lumber shipyard, where millions of dollars were at stake. Goings carefully examines court records and other archival sources to sort through the lore and legends surrounding Gohl, painting the story of a violent man in a violent time who did kill someone-maybe even more than one-but comes almost comically short of his storied reputation. Why did people believe such outrageous things about Gohl, then and now? And where did all those dead bodies come from? Goings shows how powerful economic players help build the myth of "Gohl the Ghoul" to undercut the credibility of union advocates. By pinning all these deaths on one man and building up the story of an extreme pathology, no one had to confront the structural violence of capitalism. The resulting book is not a grisly true crime tale; but an equally intriguing mystery about the creation of myth and the cost in human bodies in the making of the Pacific Northwest"--

In the early twentieth century so many dead bodies surfaced in the rivers around Aberdeen, Washington, that they were nicknamed the “floater fleet.” When Billy Gohl (1873–1927), a powerful union official, was arrested for murder, local newspapers were quick to suggest that he was responsible for many of those deaths, perhaps even dozens—thus launching the legend of the Ghoul of Grays Harbor.

More than a true-crime tale, The Port of Missing Men sheds light on the lives of workers who died tragically, illuminating the dehumanizing treatment of sailors and lumber workers and the heated clashes between pro- and anti-union forces. Goings investigates the creation of the myth, exploring how so many people were willing to believe such extraordinary stories about Gohl. He shares the story of a charismatic labor leader—the one man who could shut down the highly profitable Grays Harbor lumber trade—and provides an equally intriguing analysis of the human costs of the Pacific Northwest’s early extraction economy.

A compelling biography of the Ghoul of Grays Harbor
Aaron Goings is associate professor of history and chair of the History and Political Science Department at Saint Martin's University. He is coauthor of The Red Coast: Radicalism and Anti-radicalism in Southwest Washington and Community in Conflict: A Working-Class History of the 1913-14 Michigan Copper Strike and the Italian Hall Tragedy.
Näita rohkemNäita vähem