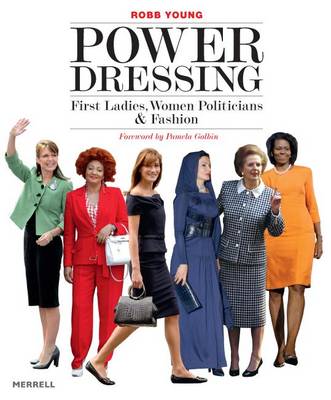 Suurem pilt
Teised raamatud teemal:
Püsilink: https://www.kriso.ee/db/9781858945156.html
Some find the constant scrutiny an unwelcome intrusion; others use fashion as their secret weapon. Whatever their views, women in politics know they will be judged by how they dress more than their male counterparts. In Power Dressing, fashion journalist Robb Young offers an engaging perspective on the ability of style to influence the careers of women politicians and first ladies. Concise thematic chapters are interspersed with profiles of more than 50 serving and former women presidents, prime ministers, MPs, royals and wives from over 30 countries, ranging from such contemporary figures as Michelle Obama, Carla Bruni-Sarkozy, Angela Merkel and Queen Rania of Jordan to such iconic women as Eva Peron, Imelda Marcos and Margaret Thatcher. Featuring hundreds of photographs that shed light on political context, and quotations from prominent figures commenting on each woman's style, this fascinating book reveals the milestone 'fashion moments' as well as the unspoken rules of the political fashion game.
Näita rohkemNäita vähem

A must-read - VOGUE (UK) Women of any age - and any career stage - will find strong ideas for self-presentation here, along with refreshing new style icons. - WALL STREET JOURNAL In the ivory tower occupied by political pundits, Young's book might just make some waves, opening up an honest dialogue about a subject that has remained intellectually taboo despite the relentless tabloid-like attention it attracts. - NEW YORK TIMES Every woman plotting her way to the top should read 'Power Dressing' - INTERNATIONAL HERALD TRIBUNE 'Power Dressing' - is an entertaining, thoughtful account of the role of clothing in politics, and the myriad ways - good, bad and ugly - that women all over the world have used it to communicate their ideas and their power. - FORBES It's about time someone, well, addressed the subject with the intelligence it deserves. Enter Robb Young - FINANCIAL TIMES a timely guide to dressing at the top - TIME OUT Power dressing is not just about fashion, nor is it just about culture. It is both of those things, and so much more - JANUARY MAGAZINE REVIEW