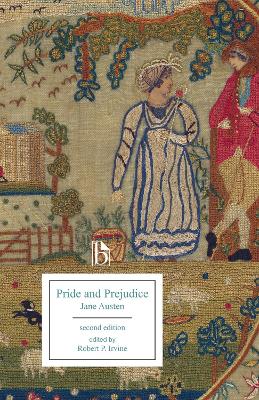 Suurem pilt
Teised raamatud teemal:
Püsilink: https://www.kriso.ee/db/9781554814893.html
Märksõnad:
Elizabeth Bennet is Austen's most liberated and appealing heroine, and Pride and Prejudice has remained over most of the past two centuries Austen's most popular novel. The story turns on the marriage prospects of the five daughters of Mr. and Mrs. Bennet, and especially on Elizabeth's prejudice against the proud and distant Fitzwilliam Darcy. Pride and Prejudice is a romantic comedy that has been read as conservative and feminist, reactionary and revolutionary, rooted in the time of its composition and deliberately timeless. Robert Irvine's introduction sets the novel in the context of the literary and intellectual history of the period, dealing with such crucial background issues as class relations in Britain, female exclusion from property and power, and the impact of the French Revolution. The introduction and annotations have been expanded and updated for the new edition, and a new appendix of Austen's juvenilia has been added. Key features New appendix with selections from Austen's juvenilia Introduction has been extensively revised and updated to reflect recent scholarship Annotations to the novel have been expanded and revised New cover!
Näita rohkemNäita vähem
Appendix A: From the Juvenilia
1. from Volume the First: "The Three Sisters".
2. from Volume the Second: "From a young Lady in distress'd Circumstances to her freind". Appendix B: From Austen's letters to her sister Cassandra
1. 8-9 January 1799
2. 11 June 1799
3. 29 January 1813
4. 4 February 1813 Appendix C: Contemporary Periodical Reviews of Pride and Prejudice.
1. from The British Critic
2. from The Critical Review Appendix D: From the Conduct Books
1. James Fordyce, Sermons to Young Women (1766)
2. John Gregory, A Father's Legacy (1774) Appendix E: Domestic Tourism
1. William Watts, Seats of the Nobility (1779)
2. William Bray, Sketch of a Tour into Derbyshire (1777) Appendix F: Burke on the French Revolution (1790) Appendix G: Discussion of Women's Role after the French Revolution
1. Mary Wollstonecraft, A Vindication of the Rights of Woman (1792)
2. Hannah More, Strictures on Female Education (1799) Appendix H: The Militia Regiments on the South Coast of England in 1793-95
1. Women at the Brighton camp
2. The mutiny of the Oxfordshire Militia
Robert P. Irvine is a Senior Lecturer in English Literature at the University of Edinburgh.
Näita rohkemNäita vähem