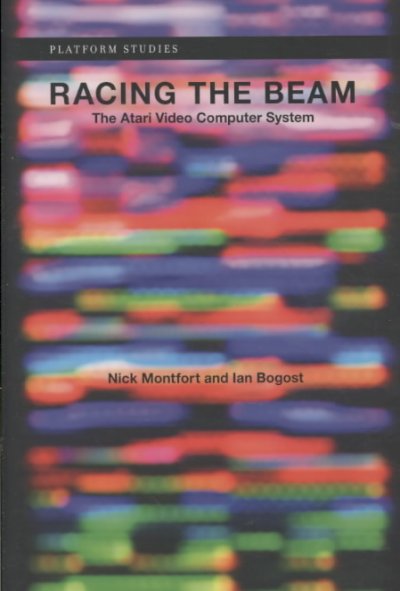 The Atari Video Computer System dominated the home videogame market so completely that "Atari" became the generic term for a videogame console. The Atari VCS was affordable and offered the flexibility of changeable cartridges. Nearly a thousand of these were created, the most significant of which established new techniques, mechanics, and even entire genres. This book offers a detailed and accessible study of this influential videogame console from both computational and cultural perspectives.

Studies of digital media have rarely investigated platforms—the systems underlying computing. This book (the first in a series of Platform Studies) does so, developing a critical approach that examines the relationship between platforms and creative expression. Nick Montfort and Ian Bogost discuss the Atari VCS itself and examine in detail six game cartridges: Combat, Adventure, Pac-Man, Yars' Revenge, Pitfall!, and Star Wars: The Empire Strikes Back. They describe the technical constraints and affordances of the system and track developments in programming, gameplay, interface, and aesthetics. Adventure, for example, was the first game to represent a virtual space larger than the screen (anticipating the boundless virtual spaces of such later games as World of Warcraft and Grand Theft Auto), by allowing the player to walk off one side into another space; and Star Wars: The Empire Strikes Back was an early instance of interaction between media properties and video games.

Montfort and Bogost show that the Atari VCS—often considered merely a retro fetish object—is an essential part of the history of video games.

Racing the Beam doesn't spare the technical details, but is always accessible and compelling. Downright thrilling at times, in fact, a sort of The Right Stuff of video game development. -Darren Zenko, thestar.com (Toronto Star) Read it, it will do you good. -Jose P. Zagal, Game Studies Montfort and Bogost's analysis is both technically detailed and historically contextualized, both informative and methodologically instructive. They write with a rigor and grace that future contributors to the series may be at pains to match. -Seth Perlow, Convergence

Montfort & Bogost raise the bar on anyone wishing to talk meaningfully about computer culture. Not only must we interpret these machines, we must first know how they work -- and yes, sometimes this means knowing assembly code. From chip to controller, the authors lead us with ease through the Atari "2600" Video Computer System, one of the most emblematic devices in recent mass culture. -- Alexander Galloway, Associate Professor of Culture and Communication, New York University, and author of Protocol: How Control Exists After Decentralization
Nick Montfort is Professor of Digital Media at MIT. He is the author of Twisty Little Passages: An Approach to Interactive Fiction and Exploratory Programming for the Arts and Humanities; the coauthor of Racing the Beam: The Atari Video Computer System and 10 PRINT CHR$(205.5+RND(1)); : GOTO 10; and the coeditor of The New Media Reader (all published by the MIT Press). Ian Bogost is Ivan Allen College Distinguished Chair in Media Studies and Professor of Interactive Computing at the Georgia Institute of Technology, a Founding Partner at Persuasive Games LLC, and the coauthor of Newsgames: Journalism at Play (MIT Press, 2010).
Näita rohkemNäita vähem