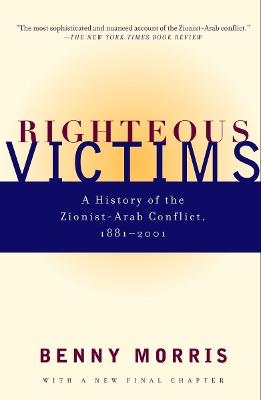 Draws on Israeli, Western, U.N., Arab, and Palestinian archives to present an objective analysis of the Arab-Israeli conflict and the fragile inner workings of the peace process. Reprint. 10,000 first printing.

At a time when the Middle East has come closer to achieving peace than ever before, eminent Israeli historian Benny Morris explodes the myths cherished by both sides to present an epic history of Zionist-Arab relations over the past 120 years.

Tracing the roots of political Zionism back to the pogroms of Russia and the Dreyfus Affair, Morris describes the gradual influx of Jewish settlers into Palestine and the impact they had on the Arab population. Following the Holocaust, the first Arab-Israeli war of 1948 resulted in the establishment of the State of Israel, but it also shattered Palestinian Arab society and gave rise to a massive refugee problem. Morris offers distinctive accounts of each of the subsequent Israeli-Arab wars and details the sporadic peace efforts in between, culminating in the peace process initiated by the Rabin Government. In a new afterword to the Vintage edition, he examines Ehud Barak’s leadership, the death of President Assad of Syria, and Israel’s withdrawal from Lebanon, and the recent renewed conflict with the Palestinians. Studded with illuminating portraits of the major protagonists, Righteous Victims provides an authoritative record of the middle east and its continuing struggle toward peace.
Näita rohkemNäita vähem

"The most sophisticated and nuanced account of the Zionist-Arab conflict."-"The New York Times Book Review
""A very rich account.... Defies sweeping generalizations about the conflict and facile attribution of moral responsibility to any one side."-"Foreign Affairs"

A detailed account of the century-long struggle between Zionists and Palestinian Arabs that has destabilized the whole of the Middle East since the middle of the 20th century. This unique and tragic struggle between two conflicting nationalisms for the same small pice of territory has sucked in more and more states: it was first entangled with the interests of the British Empire, then with the fate of the Jews in Nazi-occupied Europe and finally, as Zionism became a worldwide rather than just a narrowly Russian and east European-based movement, the USA where it established deep roots after World War II and influenced American policy in the Middle East during the Cold War. It is still the world's greatest unresolved conflict. Even though some Arabs (especially the PLO and Syria) have come to accept that Israel is militarily indefatigable and have therefore grudgingly moved towards peace, many radical Arab states are not reconciled to a Jewish state in Palestine and it is not yet clear that either Israeli good will or ill-will will decisively temper or resolve this bitter hostility. (Kirkus UK)

A highly interesting, quite comprehensive, yet also at times jaundiced history of the military and diplomatic aspects of the Arab-Israeli conflict. Morris (History/Ben-Gurion Univ., Israel; The Birth of the Palestinian Refugee Problem, 1947-1949, not reviewed), Israel's leading revisionist historian, continues to debunk some of his country's most cherished myths. Concerning Israel's War of Independence, for example, he notes that, contrary to the popular belief, the fledgling nation enjoyed clear military and strategic superiority. His coverage of the recurrent military conflicts is clear, detailed, and otherwise outstanding. But Morris's highly critical view of the Zionist movement and the Jewish state is highly problematic, particularly because it involves a selective marshaling of some bistorical evidence. For example, he claims that David Ben-Gurion and many other Zionistf/Israeli leaders favored the "transfer" of Arabs out of Palestine. The expulsion of tens, and possibly hundreds, of thousands of Palestinian Arabs unquestionably did take place during the War of Independence and Six Day War. Yet as Morris himself makes clear, the term "transfer" conflates advocacy of a planned, possibly compensated exchange of populations and ah abrupt expulsion of Arabs. In addition, Morris demonstrates that there was, at best, ah inconsistent, often only rhetorical advocacy of transfer. While relating Israeli human-rights violations and atrocities against Arabs, Morris also scants corresponding Palestinian and other Arab acts. Thus, there is almost no mention of the fact that, during the Jordanian occupation of the old city of Jerusalem, all synagogues and other Jewish holy sites were desecrated. Morris generally has a fine sense of historical narrative and, at times, a knack for a telling phrase (he notes of the Arab states that "in 1973 and 1992, they ultimately managed to turn limited military defeat into limited political victory"). Yet his long history of the Arab-Israeli conflict, well documented, highly informative, and fluidly composed as it is, lacks the balance that a less polemical historian might produce. (Kirkus Reviews)