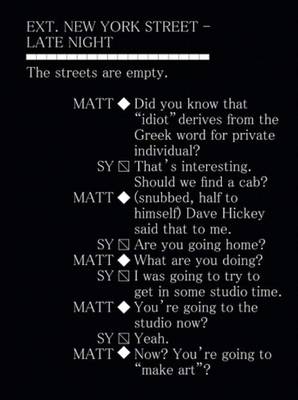 Set in the New York art world, The Sixth Year reinterprets the format of a TV series. In five episodes, a fictionalized narrative stages the backstage and theatricalizes the social interactions and power games, the aspirations, passions, and everyday realities of the field.

A great number of artists made contributions that vary widely in form and scale: from acting, screenwriting, directing, and cinematography, to providing artworks as props or material for the script. The screenplay is based on interviews with artists, curators, gallerists, collectors, and art advisors, and their opinions, anecdotes, and gossip.

As a project that ran parallel to a year-long residency and exhibition program at a small art space, The Sixth Year is an attempt to rethink traditional exhibition formats and audiences, and to open up a less determined space for both making and engaging with art.