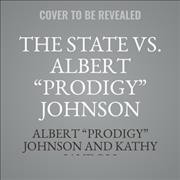 The followup to Prodigy's critically acclaimed My Infamous Life, detailing the legal squabbles and hurdles endured following his prison sentence

In 2011 famed rapper Albert "Prodigy" Johnson released his memoir, My Infamous Life-his journey from his time as a member of legendary rap duo Mobb Deep to his three-and-a-half year prison sentence. However, the real story began once he was released.

As discussed in his previous memoir, the NYPD hip-hop task force played a major role in Prodigy's arrest. Their presence remained, even following his time served. Prodigy didn't help the cause, finding himself in a series of situations that were partly avoidable, partly inevitable. They say hindsight is 20/20, and The State vs. Albert "Prodigy" Johnson is full of retrospective tales.

Fans of Prodigy's rap legacy will enjoy the stories his followup memoir details, but true-crime fans unfamiliar with his music will also be intrigued by what Prodigy has in store in this nonstop ride through life in the fast lane.