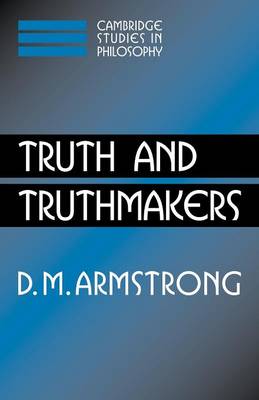 Suurem pilt
Teised raamatud teemal:
Püsilink: https://www.kriso.ee/db/9780521547239.html
Märksõnad:
Truths are determined not by what we believe, but by the way the world is. Or so realists about truth believe. Philosophers call such theories correspondence theories of truth. Truthmaking theory, which now has many adherents among contemporary philosophers, is a recent development of a realist theory of truth, and in this book, first published in 2004, D. M. Armstrong offers the first full-length study of this theory. He examines its applications to different sorts of truth, including contingent truths, modal truths, truths about the past and the future, and mathematical truths. In a clear, even-handed and non-technical discussion he makes a compelling case for truthmaking and its importance in philosophy. His book marks a significant contribution to the debate and will be of interest to a wide range of readers working in analytical philosophy.
Näita rohkemNäita vähem

'Armstrong's systematic contribution in this book to the truth maker style of metaphysical enquiry is a very major one; we may well learn more from suggestions he makes ... covers much more ground than its length would suggest.' Journal of Philosophy "It is clear and engaging." Disputatio

This book, first published in 2004, makes a compelling case for truthmaking and its importance in philosophy.

David Armstrong's many publications include A Materialist Theory of Mind (1968) and A World of States of Affairs (1997).
Näita rohkemNäita vähem