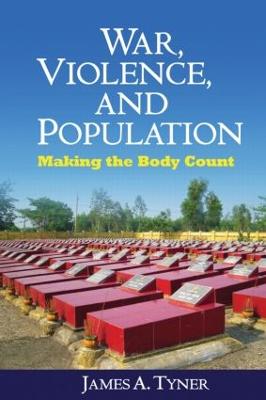 Suurem pilt
Teised raamatud teemal:
Raamatu kodulehekülg: http://www.guilford.com
Püsilink: https://www.kriso.ee/db/9781606230381.html
Märksõnad:
Winner of the AAG Meridian Book Award for Outstanding Scholarly Work in Geography. Grounded in theory and research, this book offers a spatial perspective on how and why populations are regulated and disciplined by mass violence - and why these questions matter for scholars concerned about social justice. James Tyner focuses on how states and other actors use acts of brutality to manage, administer, and control space for political and economic purposes. He shows how demographic analyses of fertility, mortality, and migration cannot be complete without taking war and genocide into account. Stark, in-depth case studies provide a powerful and provocative basis for retheorizing population geography.
Näita rohkemNäita vähem

"A principled and passionate analysis of the intimate connections between populations and political violence. Tyner's case studies of Vietnam, Cambodia, and Rwanda are vivid and searching demonstrations of the public importance of a critical population geography, and deserve an audience far beyond the academy."--Derek Gregory, Department of Geography, University of British Columbia, Canada"Tyner identifies valuable connections between population geography and poststructural and postcolonial theory, and helps scholars understand how particular forms of knowledge have legitimated and perpetuated specific geographies and histories of violence. This is an important book not only for what it contributes to the political vocabulary of population geography, but even more strikingly, for how it pushes forward understanding of the spatial politics of state-sanctioned violence and genocide."--Rachel Silvey, Department of Geography and Programme in Planning, University of Toronto, Canada "Inspiring case-study chapters focused on Vietnam, Cambodia, and Rwanda pull no punches as they illustrate how bodies are disciplined and populations regulated through practices such as rape, the targeting of civilians, and ethnic cleansing. This is bold and compelling scholarship that will spark discussion and debate in courses on population and globalization, human geography, political economy, gender and critical race studies, and social justice and activism. The combination of theoretical depth and empirical breadth makes this the rare type of book that can be successfully used alongside journal articles or media material."--Adrian Bailey, School of Geography, University of Leeds, West Yorkshire, UK "Tyner places the theorizing and analysis of the human body center stage. His analysis of a topic generally neglected by population geographers charts an alternative future for population geography--and is a call for social justice and action. In contrast to mathematical and statistical spatial demography, which can be distanced and removed, Tyner's spatial demography of the violence done to human bodies is as much ethical as it is empirical. Making the case for a 're-humanization' of population geography, this compelling book will be of interest to a broad community of social scientists. It will be a useful supplementary text for an introductory cultural/human geography course or an advanced population geography or development course."--Richard Wright, Orvil E. Dryfoos Professor of Public Affairs and Geography, Dartmouth College "This is one of the few books to connect contemporary demographic concerns to critical geopolitics. Tyner shows that recent theoretical developments in geography, especially around the body and biopolitics, are crucial for reinvigorating both the ethical commitments and analytical precision of the discipline. His evocative case studies compel geographers to consider how questions of human population, sadly, are never far removed from questions of war."--Arun Saldanha, Department of Geography, University of Minnesota "Tyner unpacks a rather overwhelming set of issues and questions related to the disciplining of bodies and the regulation of populations through acts of violence, in an exceptionally clear, straightforward, and compelling way. This book is marked by innovative and original scholarship from beginning to end. Highly readable, it will appeal to both scholars and students interested in issues related to social injustice and mass violence."--Emily Skop, Department of Geography and Environmental Studies, University of Colorado at Colorado Springs

Näita rohkemNäita vähem
James A. Tyner is Professor of Geography at Kent State University. His research interests include mass violence, war, and social justice. The author of numerous books, articles, and book chapters, he is the recipient of the Glenda Laws Award from the Association of American Geographers, among other honors.
Näita rohkemNäita vähem
Logi sisse Registreeri