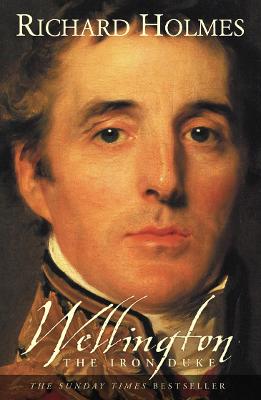 Suurem pilt
Teised raamatud teemal:
Raamatu kodulehekülg: http://www.harpercollins.co.uk
Püsilink: https://www.kriso.ee/db/9780007137503.html
Märksõnad:
Richard Holmes, highly acclaimed military historian and broadcaster, tells the exhilarating story of Britain's greatest-ever soldier, the man who posed the most serious threat to Napoleon. The Duke of Wellington's remarkable life and extraordinary campaigns are recreated with Holmes' superb skill in this compelling book. Richard Holmes charts Wellington's stellar military career from India to Europe, and in the process, rediscovers the reasons Queen Victoria called him the greatest man the nineteenth century had produced. Combining his astute historical analysis with a semi-biographical examination of Wellington, Holmes artfully illustrates the rapid evolution in military and political thinking of the time. Wellington is a brilliant figure, idealistic in politics, cynical in love, a wit, a beau, a man of enormous courage often sickened by war. As Richard Holmes charts his progress from a shy, indolent boy to commander-in-chief of the allied forces, he also exposes the Iron Duke as a philanderer, and a man who sometimes despised the men that he led, and was not always in control of his soldiers. Particularly infamous is the bestial rampage of his men after the capture of Cuidad Rodgrigo and Badajoz. THE IRON DUKE is a beautifully produced book, complete with stunning illustrations and colour plates. Richard Holmes' TV series to accompany THE IRON DUKE will be lavishly constructed in four parts, and filmed on location in Britain, India, Spain, Portugal, France and Belgium.
Näita rohkemNäita vähem

An astute historical analysis and a hugely readable informative narrative about Wellington's life from a shy, indolent boy to commander in chief of the allied forces that defeated Napoleon. The Iron Duke is shown to be idealistic in politics, cynical in love, a wit and a man of enormous courage often sickened by war.

Renowned military historian Richard Holmes here turns his expertise to the story of the Duke of Wellington, a man regarded as Britain's 'greatest-ever soldier' in a beautiful book that serves as a companion to the lavish BBC series of the same name. The introduction pays tribute to Wellington, and reveals the huge impact he had on the author as a young boy. Acknowledging the fact that the Duke may not have always been good, Holmes defends him as being 'unquestionably great', and takes the reader back to his childhood days as Arthur Wesley, a member of the Protestant minority under siege in 18th-century Ireland. A far from ideal financial situation drove the family to England, where the young Arthur went to Eton as 'a shy young Irishman in England, an outsider'. Having dabbled in politics, he found himself in a British army smarting from defeat in America, and he returned from a disastrous military campaign in March 1795 all the wiser for having 'learnt what not to do'. The history of the times are expertly considered - from the development in weaponry to the enormous events unfolding across the continent of Europe - as they form a background to Wellington's life and his illustrious military career. But Holmes doesn't just discuss his role as a soldier; we also hear of his political idealism, his philandering and his skill with a well-placed pithy remark. Complete with maps, illustrations and colour plates, this book pretty much says all that needs to be said about Wellington, and very readably too. (Kirkus UK)

Näita rohkemNäita vähem
Richard Holmes was one of Britain's most distinguished and eminent military historians and broadcasters. For many years Professor of Military and Security Studies at Cranfield University and the Royal Military College of Science, he also taught military history at Sandhurst. He was the author of many best-selling and widely acclaimed books including Redcoat, Tommy, Marlborough and Wellington, and famous for his BBC series such as War Walks, In the Footsteps of Churchill and Wellington. He served in the Territorial Army, retiring as a brigadier and Britain's most senior reservist, and was Colonel of the Princess of Wales's Royal Regiment from 1999 to 2007. Richard Holmes died suddenly in April 2011 from pneumonia. He had been suffering from non-Hodgkins' Lymphoma.Writer and historian Hugh Bicheno is a former intelligence officer and anti-terrorism consultant, who after many years living in the Americas now lives in Cambridge. His previous books include Gettysburg, Midway and Crescent and Cross.
Näita rohkemNäita vähem