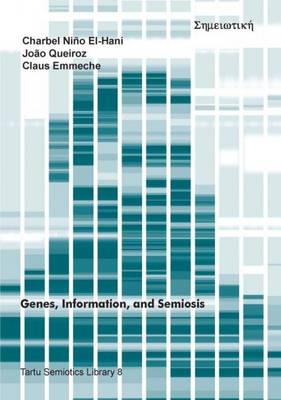 Suurem pilt
Teised raamatud teemal:
Püsilink: https://www.kriso.ee/db/9789949190386.html
Up to the middle of the 20th century, biologists studied genes without seeing them as informational structures; information theory was an engineering tool not dealing with the meaning of messages; and, semiotics, the study of signs and their meaning, dealt only with human culture. Today - after progress in molecular biology and a naturalist turn in general semiotics - researchers are beginning to realize that genes, information and semiosis, or sign action, can no longer be understood in isolation. This insight derives from a new scientific field. Biosemiotics investigates the meaning, interpretation, communication, and habit formation of living systems, and the biochemical conditions for sign action. This book clarifies the information talk in molecular and systems biology by building a semiotic model of genes and protein synthesis. It is consistent with the best scientific understanding, and it is non-reductionist, integrating signs, molecules, and natural interpretation. It offers a new definition of gene in biology, and an understanding of information that does not reduce it to digital bits, but sees it as related to the forms and processes of living organisms. Readers not familiar with molecular biology or semiotics are provided with brief introductions to basic concepts. The book is a challenge to entrenched beliefs in the anthropic nature of signs and the substantial nature of genes. No scientific revolutions are offered, but a set of deeper insights into an exciting, new cross disciplinary perspective upon life and signs.
Näita rohkemNäita vähem
Chapter
1. 'Genes' and 'information' as conceptual problems;
Chapter
2. The problem of the gene;
1. The birth of the 'gene' as an instrumental concept;
2. The fruitful tension between instrumentalist and realist views of the gene;
3. Genes as units in Mendelian genetics;
4. The classical molecular gene concept;
5. The golden years of molecular genetics;
6. How the gene concept became a problem: why is the gene not a structural unit?;
7. How the gene concept became a problem: why is the gene not a functional unit?;
8. What is a gene, after all?;
9. The gene in the era of genomics and systems biology; 10.Some reactions to the problem of the gene;
11. But - what about 'information'?;
Chapter
3. Biosemiotics and information talk in biology;
Chapter
4. Information and semiosis in Peirce's science of signs;
1. Some basic ideas in Peirce's semiotics;
2. Kinds of Objects and Interpretants;
3. Semiosis, information, and meaning;
Chapter
5. Some other ideas about information;
1. Information theory;
2. Bateson's understanding of information as a difference which makes a difference;
3. Jablonka's concept of semantic information;
4. Concluding remarks;
Chapter
6. A semiotic analysis of genes and genetic information: First take;
1. Information talk in action: a textbook description of the 'flow of information' in a cell;
2. A general semiotic analysis of the gene as a Sign;
Chapter
7. Emergence of semiosis: A general model;
1. A multi-level approach to the emergence of semiosis in semiotic systems;
2. Semiosis as an emergent process;
3. Concluding remarks;
Chapter
8. Levels of semiosis in the genetic information system;
1. The micro-semiotic level: strings of DNA as potential Signs;
2. Transcription, RNA processing, and protein synthesis as processes of gene actualization;
3. Semiotic analysis of transcription;
4. Semiotic analysis of protein synthesis;
5. A global picture;
Chapter
9. Genes, information, and semiosis;
1. What is genetic information?;
2. What is a gene? A more radical interpretation;
3. Concluding remarks; Index of names; The authors;
Charbel Nino EL-HANI is a Professor at the Institute of Biology, Federal University of Bahia, Brazil. His research interests are philosophy of biology, biosemiotics, science education research, and animal behavior. Joao QUEIROZ is a Professor at the Institute of Arts and Design, Federal University of Juiz de Fora, Minas Gerais, Brazil. Previously, he was a professor of Semiotics and Cognitive Science at the Graduate Studies Program on History, Philosophy and Science Teaching (UFBA/UEFS), Brazil. Claus EMMECHE is Associate Professor and Director at the Center for the Philosophy of Nature and Science Studies, University of Copenhagen, Denmark. His research interests are biosemiotics, philosophy of biology, and theoretical biology.
Näita rohkemNäita vähem
Logi sisse Registreeri